Death and Daisies by Amanda Flower: A Magic Garden Mystery 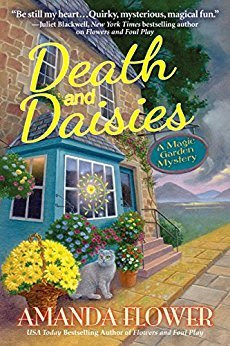 Happy Book Release Day!  A Seat by the Hearth by Amy Clipston, Death and Daisies by Amanda Flower, and Murder at Harbor Village by G.P. Gardner are a couple of the new books out today.

Death and Daisies by Amanda Flowers returns us to Bellewick, Scotland.  Fiona Knox has been busy getting her new flower shop, Climbing Rose Flower Shop ready to open with the aid of her sister, Isla.  Isla showed up at the beginning of the summer after she graduated from college and has yet to return home.  She has been acting cagey recently and spending a great deal of time texting.  The day before the grand opening, Minister Quaid MacCullen stops in and once again expresses his dislike for Fiona.  He recently barred Fiona from attending church by blocking the door and stating he did not want her corrupting the villagers (what a charmer).  That night a terrible storm hits the area and thankfully blows back out to sea by morning.  Fiona’s shop opening is a success until Kipling, the villages volunteer police chief, stumbles in crying murder and then promptly faints.  Kipling stumbled upon the reverend’s body on the beach.  Chief Inspector Neil Craig rushes away to secure the scene and a curious Fiona is not far behind him.  It is well known in the village that MacCullen disliked Fiona which puts her at the top of the suspect list.  Fiona has just started to set down roots and has no intention of letting her new life go to seed.  The only way to stop the speculation is to sniff out the killer with a little help from the magical garden at Duncreigan.

While Death and Daisies is the second book in A Magic Garden Mystery series, it can be read alone.  Everything a reader needs to know is included in this tale.  I thought the book was well-written with steady pacing throughout.  Amanda Flower has an engaging, conversational writing style that drew me into the story and it kept my attention until the very last page.  I like the characters and they are nicely developed.  We are still getting to know Fiona (it is only the second book), and she learns some new information about herself in Death and Daisies.  Hamish is such a sweetie and we learned something new about him that makes him even more endearing.  I am not a fan of Fiona’s sister, Isla.  I am hoping we will see her mature and become less self-centered.  The village sounds quaint with friendly residents except for the minister.  The murder of Reverend Quaid MacCullen is expected since he is such a nasty character.  There are several suspects, misdirection and good clues.  I wish the mystery had been more of a challenge.  However, I still enjoyed reading this beguiling narrative (I knew who now I wanted to know why).  I especially enjoy the addition of the magic from the garden, the stone and the fox.  It enhances the overall story as well as the mystery.  I like that new details are revealed in each book.  Carver Finley, a historian, has taken an interest in the garden, and I believe he will be a formidable foe for Fiona.  Death and Daisies is an enchanting cozy mystery with a charming village, friendly characters, a hint of romance, adorable little critters, magical assistance, and a murder mystery.  I am giving Death and Daisies 4 out of 5 stars (I liked it).

Flowers and Foul Play is the first book in A Magic Garden Mystery series and the e-book version is currently $1.99 on Amazon (subject to change without notice & always check price before purchasing).  I hope you have found a new book to read.  Tomorrow I am reviewing Purls and Poison by Anne Canadeo as part of the Great Escapes Tour.  May you have a charming day.  Take care and Happy Reading! 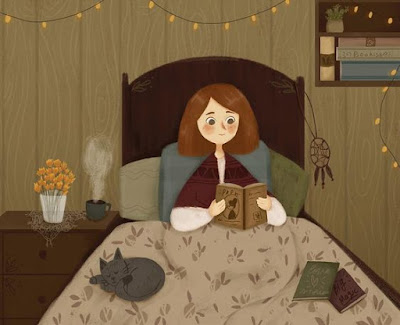