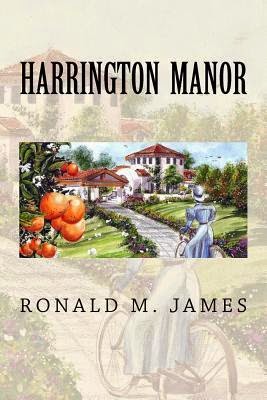 Harrington Manor by Ronald James is a mystery novel set in the 1920's. The time of moving pictures, automobiles, prohibition, and flappers! Cora and her husband, The Colonel (Peter) have a very nice home, Harrington Manor. They have acres planted with orange trees that brings them in a good income. They have four children: Shep, Reggie, Margot, and Orson. Shep is the oldest, married to Doreen, and very determined to control everything. Reggie, unfortunately, is a follower and mimics is older brother, Shep. Margot is a naïve young girl who is interested in getting married. Orson is the youngest son, dresses in a very laid back style, but is the most responsible of all the children. The Harrington's life is good until the murders happen. Their life is then interrupted with grief, the police investigation, and some amazing revelations.

I give this book 3.5 stars out of 5. It is a good story that is well-written, but I found it a little long. The first murder does not even take place until halfway through the book. There is some good humor in the book provided by a friend of Cora's, Sara, Cora, and Margot's friend, Emily Bright. The mystery is very easy to solve. I knew who would end up dead and by whom very early in the book. There are, though, some very interesting revelations that happen near the end of the book that I was not expecting. Overall, Harrington Manor is an enjoyable read.

I am off to watch a little television and then read.  I hope you had a great weekend and read some wonderful books!  Thank you for visiting and Happy Reading!

Posted by Kris Anderson, The Avid Reader at 9:47 PM