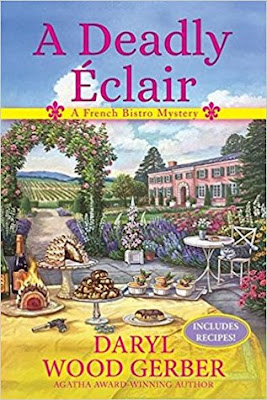 Salutations!  Christmas Angels by Nadine Dorries will be published on December 16.  It is the fourth novel in The Lovely Lane Series.  A delightful historical nurse series.

A Deadly Éclair by Daryl Wood Gerber is the first book A French Bistro Mystery series.  Mimi Rousseau owns Bistro Rousseau and Maison Rousseau in Nouvelle Vie in Napa Valley, California thanks to her mentor, Bryan Baker.  Mimi is hosting a wedding at Maison Rousseau for Angelica Barrington and Lyle Ives.  The out-of-towners dinner is going beautifully until father-of-the-bride, Edison Barrington arrives late and drunk.  Mimi handles the situation and the event proceeds.  The next morning, Angelica finds Bryan dead on the bistro patio. Unfortunately, the evidence points to Mimi as the killer.  Mimi wants to clear her name and that of her establishment.  Mimi uses her deductive skills to track down the real killer and clear her off the suspect list.

A Deadly Éclair is nicely written, contains good characters, and luscious food descriptions.  Daryl Wood Gerber sets up a lovely backdrop for A French Bistro Mystery series.  I appreciate the descriptions of Mimi’s establishments and the area. We are provided the backstory on Mimi and how she came to live in Napa Valley.  I found Mimi to be a relatable (and likeable) character along with the other people in the story.  I am glad that she is an intelligent woman running her own business.  I did feel that readers are introduced to a few too many characters in the first couple of chapters.  It was hard to keep track of everyone in the beginning.  The pace of the book is a little slower that I usually like, but it does go with this story.  The author is setting the stage for her new characters.  I am rating A Deadly Éclair 4 out of 5 stars (I liked it).  I wish the murder had been more complex.  One clue (if you need it) gives the identity of the killer.  The why takes a little longer to discern.  I did like the author’s use of misdirection to throw readers off the trail of the real culprit.  There are recipes at the end of the book for the dishes mentioned in the story.  I am eager to read more stories in A French Bistro Mystery series.  The next book is A Souffle of Suspicion which is scheduled to be published in July 2018.

I appreciate you stopping by today and reading my latest review.  I will return tomorrow to share my thoughts on Eaves of Destruction by Kate Carlisle.  I sincerely hope that each of you have a delightful day.  By the way--What do you get if you cross a turkey with an octopus?  Eight feather dusters!  Take care and Happy Reading! 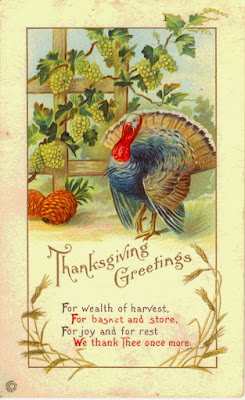