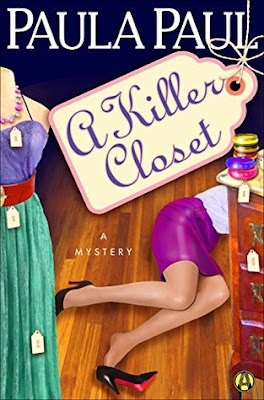 Happy Friday!  I hope all of you have had an enjoyable day.  I was delighting in the cool weather by snuggling with a blanket and a book.  I also took the opportunity to bake some sugar cookies for my mother (she loves them with icing on top).  Our smallest dog, Tuxxe (Chihuahua) really dislikes the cold weather (it's only in the 60s).  He was huddled under covers all day (he refuses to wear a sweater).

A Killer Closet is a cozy mystery by Paula Paul.  Irene Seligman is returning to her hometown of Santa Fe, New Mexico.  Her mother, Adelle Daniels needs her assistance after the death of her latest husband (Irene is not sure if it was husband number five or six).  Adelle was left with penniless (she goes through money likes its water) and guilted Irene into coming home (otherwise Irene preferred to stay in Manhattan as an assistant district attorney).  Irene is not licensed to practice law in New Mexico, so she decides to open Irene’s Closet. It will be an upscale consignment boutique (carry designer labels).  Irene’s Closet opens with a bang when a body is discovered in the storage room.  The victim is Loraine Sellers, a friend of Adelle’s.  Police Chief Andy Iglesias is on the case and is interested in getting to know Irene.  The murder turns out to be good for business until another body is left in the shop.  The second victim is Susanna Delgado and another friend of Adelle’s.  Irene is worried that her mother may be next (even though she is a pain in the tuchis), and she starts delving into the victims lives.  But the killer is close behind Irene and prepared to act.  Will the door to Irene’s Closet snap shut before the shop has a chance to take off?

A Killer Closet is easy to read and can be finished in a couple of hours.  I did, though, find it to be a very implausible novel (Irene’s actions were illogical).  I would think that an attorney in her 30s would think rationally.  Irene jumps to conclusions, acts irrationally, and does not act her age (she is also rude to someone that goes out of his way to be nice and helpful).  There are few clues provided to the mystery, but it can easily be solved (it can be figured out quite early in the book).  There is an extreme amount of foul language in the book for a cozy mystery (and it was not needed).  The story is told from various character point-of-views towards the end which is confusing (and does nothing to enhance the story).  I wish the author had told it from the third person point-of-view or from Irene’s perspective (keep it consistent).  I give A Killer Closet 2 out of 5 stars.  The mother, Adelle, was an extremely unlikable character.  You know you do not enjoy a character when you keep hoping they will be the next victim.   I found some information repeated a few times throughout the book (like it was filler) and there are other inconsistencies.  I felt that A Killer Closet needed some major rewriting and a good editor.  A Killer Closet was not my type of cozy mystery.

Thank you so much for visiting!  I will be reviewing The Innkeeper of Ivy Hill by Julie Klassen tomorrow.  Have a safe and warm evening. Take care and Happy Reading! 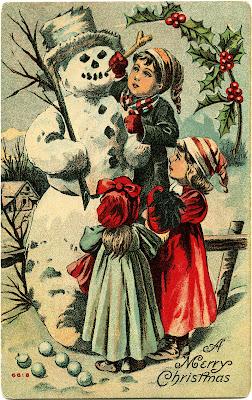 Posted by Kris Anderson, The Avid Reader at 6:40 PM