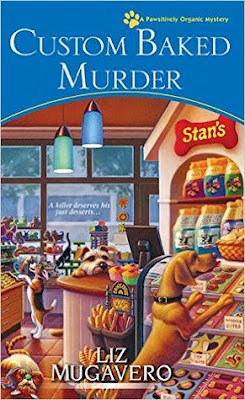 I hope everyone has had a good Thursday.  I am still fighting this awful cold, so I took it easy today. I am reading Amish Weddings by Leslie Gould while lounging in bed.  After all the hustle and bustle before Christmas, I think all of us deserve a nice rest.  Today I am featuring A Pawsitively Organic Mystery series by Liz Mugavero.  The books in the series are Kneading to Die; A Biscuit, A Casket; The Icing on the Corpse, and Murder Most Finicky.


Custom Baked Murder by Liz Mugavero is the fifth book in A Pawsitively Organic Mystery series.  Kristan “Stan” Connor is working hard on getting everything ready for the opening of her shop, Pawsitively Organic Pet Patisserie and Café, in three months (in December before Christmas) in Frog Ledge, Connecticut.  Stan is running late for her mother’s engagement party when her sister, Christine shows up at her home with her daughter, Evangeline in tow.  Christine has left her husband, Michael and wishes to stay with Stan (like she has a choice in the matter).  Stan is really running late now and quickly changes for the party.  Stan is going with her boyfriend, Jake McGee (who owns McSwigg’s).  The four of them end up arriving an hour late to the party (Stan was hoping they could skip it altogether).  Patricia Connor, Stan and Christine’s mother, greets them (with a comment about their tardiness), but her fiancé, Tony Falco is not present.  Patricia failed to tell Stan about some of guests she invited (people she would like to avoid).  Richard Ruse, Stan’s ex-boyfriend, along with some of her old co-workers including Eleanor Chang.  Tony, the town’s newly elected mayor, hired Eleanor to be his “executive coach”.  Eleanor has an abrasive personality, and she seems to make enemies wherever she goes (she is particularly hard on her daughter, Monica).  Stan is upstairs with her sister, Caitlyn.  Caitlyn stops to freshen up in the ladies room and lets out a scream upon entering the room.  There is Eleanor Chang strangled with a scarf with Patricia’s diamond ring between her teeth.  Richard Ruse ends up being the main suspect when he stumbles out of the woods in a disheveled and drunken state.  Stan will not let Richard be railroaded for a crime he did not commit (just because Tony wants everything wrapped up quickly and quietly).  Stan sets out to find Eleanor’s killer and clear Richard’s name.  Things are made a little complicated by Christine’s ex-lover, Kyle McLeod arriving in town.  He is determined to woo Christine and win her back.  Then there is the matter of Patricia and her meddling in Stan’s shop design.  Stan knew it was a bad idea to let her invest.  Life is never dull in Frog Ledge.  Join Stan on her latest adventure in Custom Baked Murder.

Custom Baked Murder is full of quirky, fun characters (even the animals have great personalities).  I found Custom Baked Murder to be an easy and enjoyable book to read.  I like the small-town setting and various townspeople.  There are some definite laugh out loud moments as well as some “oh my” areas.  It was nice to catch up with Stan’s family and friends in Frog Ledge.  I am happy to see Stan’s relationships with Jake, Patricia, and Caitlyn developing over the course of the series (and especially in Custom Baked Murder).  I give Custom Baked Murder 4 out of 5 stars (I liked it). I found the murder to be one that could be quickly solved by the reader (or an avid mystery reader who loves to solve the puzzles presented in the books).  One clue is the key to solving the murder (it’s like there is a big, neon arrow pointing to the killer).  There are other small clues in the book that will help the reader discover the culprit’s identity.  I wish the mystery had been a little more complicated (more difficult to figure out the killer’s identity).  I found the two words “long story” repeated frequently throughout the book.  I am also curious about Stan’s trust fund that was mentioned again in Custom Baked Murder.  I did not understand why Stan did not tap into this money to finance Pawsitively Organic Pet Patisserie and Café.  Why did Stan need investors (Jake and Patricia)?  It is mentioned that Stan wanted to live on her own (working) and not rely on her trust fund (I am curious).  If you enjoy reading well-written, humorous cozy mysteries with entertaining characters, then read Custom Baked Murder.

I appreciate you reading my latest book evaluation.  I am going to put on my pj's and climb back into bed (the cold has to go away soon).  PBS is showing Downton Abbey from the beginning starting tonight at 9 p.m. (I just love this show). I am going to enjoy the marathon.  I hope everyone has a good night.  Take care, stay warm and Happy Reading! 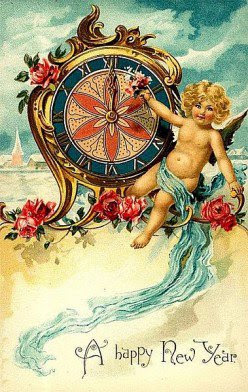 Posted by Kris Anderson, The Avid Reader at 7:52 PM