The Price Guide to the Occult: A Paranormal Novel by Leslye Walton 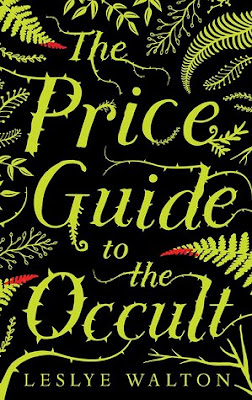 The Price Guide to the Occult by Leslye Walton is a unique paranormal novel.  Rona Blackburn moved to Anathema Island off the coast of Washington over a hundred years ago.  She claimed a plot of land and put a sign on the door that said “witch”.  A year after she arrives on the island, the men come at her home and set fire to it.  Rona escapes into the woods and casts a dark spell on them using her blood and that of her daughter.  A hundred years later, her descendant Nor is the eighth (and last) of the Blackburn daughters.  She lives with her grandmother, Judd and has what she calls an unremarkable gift (she can hear and talk to plants as well as animals).  Nor’s goal is to make the slightest mark as humanly possible on the world.  Nor dropped out of high school and works in a dead-end part-time position at the Witching Hour.  Then The Price Guide to the Occult comes out which allows people to order spells for a price.  Two things catch Nor’s attention:  the picture of the author and the free spell included.  The author and the caster of the spells is Fern Blackburn, Nor’s mother and the free spell is a Blackburn family spell.  Fern is a dangerous witch with formidable magic.  As Fern’s book becomes more popular, the island starts deteriorating.  Trouble is coming to Anathema Island and there is nothing that can be done to prevent it.  There is only one person who can defeat the evil but is she ready to face her destiny.

The Price Guide to the Occult had a captivating description, and I was eager to read it.  The prologue captured my attention, and I soon discovered it was the best part of the book.  I am not sure what happened to the author after she wrote the prologue.  Her writing became stilted and her word choices made for a slow-paced story (good for insomnia).  It seemed like Ms. Walton was overthinking her writing.  The transitions between sections were awkward and jarring.  Ms. Walt does provide some lovely descriptions that help readers imagine the island and the foliage.  The book is better at the end when the action picks up, but I feel that few readers would make it that far into the story.   There is a lack of character development and depth.  Nor was the most developed character, but she was not likeable nor is she compelling.  Nor was too busy trying to be bland and fixated on Reed (her love interest).  Of course, the author had to insert a love triangle.  The romance did not feel natural.  Fern had the potential to be a great antagonist, but she did not reach it.  She is evil, but one dimensional.  I did like Ms. Walton’s unique take on magic.  I have not encountered it before in other paranormal novels.  The Price Guide to the Occult does contain foul language, gruesome violence, and self-harm (fair warning).  The ending was lackluster, unsatisfying, rushed and predictable.  The author left the possibility of a sequel (oh dear).  The Price Guide to the Occult is geared to the New Adult audience (over sixteen).  My rating for The Price Guide to the Occult is 2 out of 5 stars.

Thank you for checking in today and reading my review.  I will be featuring Dead Girl Running by Christina Dodd on Monday and Murder in the Locked Library by Ellery Adams on Tuesday.  May you have a blessed day.  I hope you find time to relax with a good book today.  Take care and Happy Reading!