The Street of Broken Dreams by Tania Crosse

Good Day!  Tania Crosse always dreamed of writing historical novels and now it has come true.  Tania has written a series of books based on her beloved Dartmoor and is now setting her stories in London and the south east.  Readers can connect with Tania Crosse on Facebook and Twitter (@TaniaCrosse). 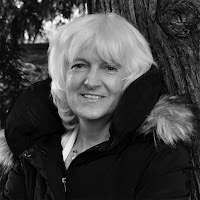 The Street of Broken Dreams by Tania Crosse takes us back in time to 1945 in London.  Eva Parker is considered the matriarch of Banbury Street and is always the first person to greet newcomers.  Eva is married to Stan and they have six children.  Currently only Mildred and Jake are living at home.  Bridie and Ron Creswell are moving into 12 Banbury Street with their three children:  Cissie, Zac and baby Jane.  Cissie is a dancer who works with the Romaine Theater Company to entertain civilians during the war.  She is currently recovering from an ankle injury, but it is obvious that something else is bothering her.  One night in May of 1944 destroyed Cissie and she has not found a way to move forward.  The family is hoping the move to Banbury Street will provide a new start.  Mildred Parker is engaged to Gary who is currently fighting in the pacific.  She works as a bus conductress where she meets Oscar Miles.  Mildred begins to have doubts about committing herself to a man she barely knows.  Eva keeps watch over her children and the other people on the lane.  She offers guidance and comfort to those who need it.  When Cissie is offered an opportunity to get justice, she seeks out Eva’s counsel.  Mildred is faced with an impossible choice.  Eva will support her daughter’s decision, but Mildred will have to live with the consequences.  World War II is drawing to a close, but the effects will last for many years to come.

The Street of Broken Dreams is the second installment in Banbury Street Series.  I do recommend reading The Candle Factory Girl before embarking on The Street of Broken Dreams.  Provides good background on Price’s.  I thought The Street of Broken Dreams was well-written with steady pacing.  The transitions between storylines was smooth.  I do want to let readers know that the book has a disconcerting beginning.  It is a necessary scene, but it is unsettling with the violence.  There are great characters in the story beginning with Eva Parker who has a big heart.  Mildred became engaged to Gary at the beginning of the war.  It was hasty and they hardly knew each other.  Cissie loves to dance and, after a terrifying night, it is the only thing that brings her relief.  Jake Parker is a thoughtful, caring young man who is smitten with Cissie.  He can see that she will need time to heal and he is willing to wait.  I found that Tania Crosse captured this period in time especially with the attitudes and emotions of the people.  England had been at war much long than the United States.  They had been suffering with severe food shortages.  Rationing was strict and it was a complex system (ration coupons, points).   The Street of Broken Dreams is an emotional novel that takes us through the end of World War II.  I like that we get to see the war through a civilian’s perspective.  I appreciated the reillumination of Big Ben was included as well as people crowding around Buckingham Palace when the end of the war was announced.  People wanted to see the King, Queen, Princesses and the Prime Minister.  I liked the epilogue that takes us six years later and gives readers a satisfying ending to the story.  Come along to Banbury Street in The Street of Broken Dreams to join Mildred Parker and Cissie Creswell on their journeys.

She stared up, motionless, at the dark, cold arc of the sky. A dead, three-quarter moon struggled overhead, peering between banks of grey mocking cloud and spilling its liquid silver glow over the bomb site. She couldn’t move, pinned by shock to the rubbled ground and broken bricks beneath her, eyes trained on the ether that hovered above, every detail searing into her memory forever.

That stretch of her nightly journey home always made her stomach clench with uneasiness. Five minutes’ walk from where she got off the last bus, she turned down the long street that was no longer a street. Once upon a time, it had been a continuous terrace where people and families had lived and played, a pleasant, tree-lined road opposite a small London park. But since the bombs had come, it was an empty void, the site only partially cleared, tottering walls propped up to make them safe until the bulldozers moved in. The burned-out beams were like black skeletons against the sky, and in the darkness, the ruins were but a tangle of shadows where writhed the ghosts of those who had perished in the blasts.

Tonight, though, had been different. The wondrous reverie that swirled in her head had been but mildly interrupted by the kerfuffle as she’d waited on the platform at the back of the bus. As it drew to a halt at her stop, a large figure had crashed down the stairs from the upper deck. It had landed in a heap by her feet. In the gloom of the blackout, she’d just been able to distinguish the shape of an American forage cap. And by the smell of alcohol that wafted around the fellow, he’d clearly had far too much to drink.  ‘Sorry, ma’am.’ An instant later, the silhouette of a second GI had followed down the stairs and hauled his inebriated compatriot to his feet.

‘Best get him home, sonny,’ the bus conductor, an older man, had said with a mixture of disgust and sympathy. ‘Best thing’s vinegar and a raw egg – if yer can find such a thing,’ he ended with a grimace.  The girl had waited while the sober GI dragged his companion onto the pavement before stepping down off the platform herself. While they staggered away down the road, she’d paused to let her eyes focus in the darkness. She’d tipped her head skyward and a beam of moonlight had fallen across her face as the clouds parted for a brief moment. At least it wasn’t utterly pitch-dark and she should be able to grope her way along the familiar route home without any trouble.

‘Hey, little lady, d’ya want a ciggie?’  The lurching voice at her elbow had made her jump. She’d known who it was before she’d even turned her head. The gust of cigarette breath laced with beer and whisky fumes had fanned her nostrils, and she’d pulled back with a shudder.  ‘Put that out!’ she’d retorted as he’d waved a lit cigarette in front of her. ‘That’s all it’d take if there was a bomber overhead.’

‘But there ain’t no bombers—’  ‘Yeah, give me that.’ The other soldier had suddenly appeared and, easily grabbing the little white stick with its glowing tip from his friend’s hand, had ground it out under his foot. ‘My apologies again, miss. He gave us the slip. Come on, Chuck. Let’s get ya back.’

The second chap’s voice was deep and sonorous, and the girl couldn’t quite make out his accent. It was American, yes, but there was something else mixed in with it. Casting a quick, disdainful glance in his direction, she got the impression in the glimmer of moonlight that he was dark-skinned. Ah, that might explain it. There were plenty of black GIs in the US Army, after all.

But she wasn’t going to hang around to find out if she was right. She’d set off down the road, rolling her eyes in annoyance as she heard the drunk GI’s voice raised in protest.  ‘But look at her! She’s a little beauty. And she’s got spunk. Ya saw her face in the moonlight. Ain’t she the prettiest thing ya’ve seen all night?’
‘I’m surprised ya can see anything at all, ya’re so pie-eyed. Time to sleep it off, I reckon. Now, come on!’

The sober Yank had grunted in exasperation, and when the girl dared to risk a furtive look over her shoulder, she saw he was half dragging his stumbling pal away – thankfully in the opposite direction. Well, that was a relief! Within moments, she’d forgotten all about the incident as she’d made her way through the unlit streets, and she slid back deliciously into the glorious fantasy. It hadn’t been a fantasy, though, had it? It had been real.

The Street of Broken Dreams is available on Amazon, Kobo, Google Play, and iBooks.  The Candle Factory Girl is available on Kindle Unlimited on Amazon (great program).  Thank you for visiting today.  Please take the time to visit the other stops on The Street of Broken Dreams Blog Tour (schedule below).  I will be sharing my thoughts on Courage of the Shipyard Girls by Nancy Revell tomorrow.  It is the sixth novel in The Shipyard Girls Series.  Take care and Happy Reading! 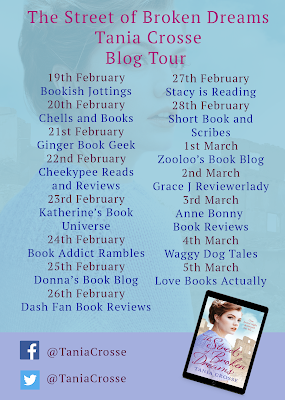