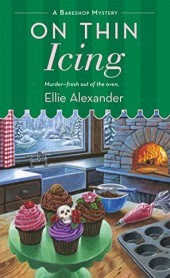 Happy New Year's Eve!  It is the very last day of 2015.  It is also considered Unlucky Day!  Funny how it falls on the last day of the year!  Are going to a party tonight or staying in?  Do you watch the ball drop from Times Square?  I, personally, stay at home (I am sure none of you are surprised by this).  The animals get so scared by the fireworks.  I do watch the ball drop, though, in Times Square!


On Thin Icing by Ellie Alexander is the third book in A Bakeshop Mystery series.  Juliet “Jules” Capshaw has been back home in Ashland, Oregon for the last six months.  Jules found out that her husband, Carlos, of three years had been lying to her.  Jules met Carlos while working on a cruise ship.  Carlos was the head chef and Jules was the pastry chef.  After finding out about Carlos lies, Jules went home to Ashland has since been working with her mother, Helen at the family bakery called Torte.  Jules has an opportunity to cater a retreat for the executive board of the Oregon Shakespeare Festival (which is based in Ashland).  The retreat will be held at Lake of the Woods resort near Ashland.  Jules agree to the job and takes their employee, Sterling with her.

The resort is beautiful, but the bartender, Tony is obnoxious (and the owner, Mercury is a wee bit flaky and unorganized).  Then the unexpected happens.  Jules husband, Carlos shows up (thanks to Jules mother).  Just what Jules does not need.  The next morning Jules is looking for some of their supplies when she finds Tony stuffed in a freezer.  They are snowed in at a remote cabin with a dead body and a killer (and Jules estranged husband).  This should be a real interesting weekend!  Will they be able to find the killer before someone else is killed?

On Thin Icing is an easy and quick read.  However, I felt it was not as good as the first two books in the series.  The book was thin on clues and the focus was not on the mystery (call me crazy but I feel the mystery should be the main focus of a cozy mystery).  There was too much emphasis on Jules attraction to Carlos (I got weary about hearing how attractive Carlos was, his sexy accent, and his excellent cooking).   Food descriptions to up a big portion of the book (the food sounded delicious, but did the writer have to describe every single thing the people cooked in the book).  I give On Thin Icing 3 out of 5 stars.  This book was missing the quirky townspeople and the bakery.  I also felt that the theme has been done too many times this year.  They are stuck in a remote place with a dead body and a murderer.  The plus side is the limited suspect pool.  The down side is the limited number of suspects (it is an oxymoron).  At the end of the book you will find the recipes for the dishes made in the story as well as a sneak peak of Caught Bread Handed (the next book in the series).

The first two books A Bakeshop Mystery series are Meet Your Baker and A Batter of Life and Death.  I received a complimentary copy of On Thin Icing from NetGalley in exchange for an honest review.

I am currently reading The Children's Home by Charles Lambert (it is awful).  I hope everyone has a great evening!  Make sure to stay safe and stay off the road if possible!  Have a wonderful New Year!