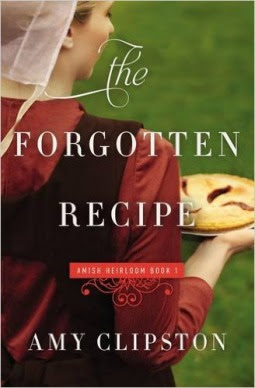 Happy Poinsettia Day!  Congress created this day in honor of Joel Roberts Poinsett.   He was the first Ambassador to Mexico. Ambassador Poinsett brought the poinsettias to his plantation in South Carolina and grew them.  He liked to give them as gifts to his friends.  My mother has had this one poinsettia for many years.  We keep it on our back patio.  The flowers are so beautiful when they turn red.

The Forgotten Recipe is the latest book by Amy Clipston.  Veronica Fisher is devastated over the loss of her fiancé, Seth Lapp.  He died in an accident at work.  She has been unable to move forward nor is she grieving properly.  Veronica has kept herself busy cleaning.  She sets out to clean the families’ attic and discovers a beautiful hope chest.  Inside the trunk she finds a recipe for her grandmother’s raspberry pie recipe.  Veronica quits cleaning the attic to go off and try the recipe.  It turns out to be a success and quite popular with locals and tourists.

Jason Huyard works at the Lancaster Shed Company (owned by his father and uncle).  Seth Lapp was his best friend and co-worker.  Jason was there when Seth feel to his death.  He is having a hard time dealing with the loss of his friend.  He has been thinking quite a bit about Veronica.  Seth talked about her all the time and Jason feels like he knows her.  His mother sends him to buy a raspberry pie and discovers Veronica.  Jason does not tell her that he knew Seth (big mistake).  Slowly Jason and Veronica spend time together and get to know each other.  Veronica is hesitant at first because she had made a promise to love only Seth when he proposed.  Veronica and Jason have something special.  But can Jason’s secret ruin their relationship?  Will Veronica ever be able to trust again?

The Forgotten Recipe is a lovely novel.  It is well written and heartwarming.  It is about love, soul mates, forgiveness and trust (and a good pie recipe).  It is the type of book that you want to read on a cold winter evening in front of a fireplace.  I give The Forgotten Recipe 4.5 out of 5 stars.  You cannot go wrong with one of Amy Clipston’s novels.  They are always enjoyable to read and they draw the reader into the story.  The story is left with a cliffhanger (or a secret not revealed).  We now have to wait for the next book.  That is the only thing I found frustrating.  I wish everything had been wrapped up in this book (though I do understand why the author did it).

You can follow Amy Clipston on Amazon and Facebook.  She also has her own website.  I received a complimentary copy of The Forgotten Recipe from NetGalley (and the publisher) in exchange for an honest review.

Thank you for stopping by and checking out my review.  I am currently reading The Nightingale Nurses by Donna Douglas.  Such a wonderful series.  Have a great Saturday evening and Happy Reading!