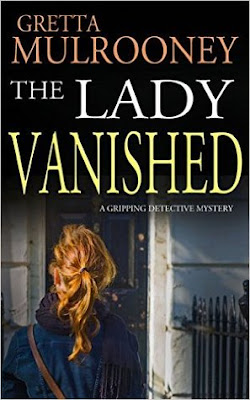 Welcome back!  Today is Letter Writing Day!  Do you still write letters (or just text messages and emails)?  My mother still corresponds via letters and cards.  She has been writing to a friend since we left Ohio when I was 12 (over 30 years ago).  There is something special about receiving a letter or a card in the mail.  It lets the receiver know that you really care about them.  Take time out of your day to send a note to someone special in your life.  For those of you who are history buffs, it is Pearl Harbor Day!  The day the Japanese bombed our naval base.  This is what caused us to enter World War II.

The Lady Vanished by Gretta Mulrooney is the first book in a new detective mystery series.  Tyrone Swift is a private investigator in London.  His newest client is Florence Davenport.  Her stepmother, Carmen Langborne is missing, and Florence wants Tyrone to find her.  It is like Carmen just disappeared one day.  Her accounts have not been touched.  Tyrone sets out to find Carmen.  The woman was not well liked so there are quite a few suspects to check out.  Will Tyrone be able to find Carmen?  What secrets will he uncover during the investigation?

The Lady Vanished contained a good mystery.  We are given some great clues and a healthy list of suspects.  However, that is about the only thing I liked in The Lady Vanished.  The characters were just not likable.  I tried to like Tyrone but he seems intent on his own self-destruction (and we get to hear all his internal debates and reflection).  Tyrone is determined to be with a woman who broke up with him and then married someone else.  This got to be annoying after a while (a lot of the book is devoted to this erstwhile affair).   The Lady Vanished just seem to go on a little too long.  I give The Lady Vanished 2.5 out of 5 stars.  I think the writer was trying to give us a strong but flawed main character.  Instead, he came across as pathetic (a good detective though).  I think with some editing and rewriting this could be a good book.  But, in its current state, it is not enjoyable (I had a hard time getting through it).

I am currently reading The Lady Who Lived Again by Thomasine Rappold.  I am off to do housework (it is never ending).  Have a great Monday and take care!  Happy Reading!