Kale to the Queen: A Kensington Palace Chef Mystery 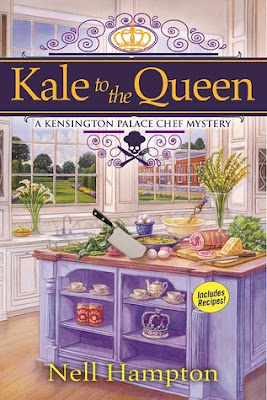 Thank you for stopping by today!  I hope each of you had a lovely Palm Sunday.  It is hard to believe that Easter will be here in just a few days. I went out yesterday to pick up items for Easter dinner. My mother believes in a traditional dinner of ham, sweet potatoes and rolls.  I will also make a special dessert.  What do you cook for Easter dinner?  Are you traditional or prefer something unique? I would be just as happy with Chinese!


Kale to the Queen by Nell Hampton is the first book in A Kensington Palace Chef Mystery series.  Carrie Ann Cole from Chicago, Illinois has just been hired to be the personal chef to the Duke and Duchess of Cambridge.  Carrie Ann arrives to work early the next morning and enters the greenhouse attached to the kitchen to pick what she needs.  In the kale section, Carrie Ann stumbles upon Frank Deems, one of her assistants.  It is obvious that Frank is dead, and Carrie Ann rushes to get assistance.  Ian Gordon, the security chief, swiftly arrives on the scene.  Blame is quickly laid on Michael Haregrove, Carrie Ann’s food prep assistant.  Though she has not known Michael long, Carrie Ann knows he did not kill Frank.  Carrie Ann is determined to clear Michael’s name so he can return to work.  Her investigation time is limited because meals still need to be cooked and served to the royal family.  Carrie Ann is off to a bumpy start in Kensington Palace, and Chef Butterbottom is less than friendly.  Chef Butterbottom does not like American’s and is very particular about his kitchen (likes the floor to be scrubbed with a brush by hand).   A further wrinkle in Carrie Ann’s new life is Chicago boyfriend, John.  John’s cooking star is on the rise and he had no wish to relocate with Carrie Ann.  But then he shows up in her quarter’s one night with unexpected offer.  Carrie Ann will need to make a decision.   To see how Carrie Ann investigation turns out and her choice, check out Kale to the Queen.


I enjoyed reading Kale to the Queen.  It has a wonderful setting, lovely descriptions of food and London, and a delightful main character.  The book is well-written and has a good pace.  I did find Carrie Ann a little too chatty with regard to the mystery.  She should have been more discreet with her investigation.  I also did not feel we needed a description of every item of food that Carrie Ann made for the royal family.  I can understand some food imagery, but not for every single dish (especially those for the children).  I liked how Carrie Ann evolved over the course of the story.  It was nice to see her grow from her experiences and face some realities about her relationship with John.  I give Kale to the Queen 4 out of 5 stars.  While the mystery was interesting, there is a very limited suspect pool.  I thought the identity of the killer was apparent.  I wish the author had made the whodunit a little more complex (added more depth and layers). There is a new love interest for Carrie Ann, and he seems to be a mysterious fellow (much better than the Chicago boyfriend).  I just hope that the author develops the relationship slowly and keeps it playing softly in the background (it is a mystery novel, not a romance novel).  Kale to the Queen captured my interest right away and held it throughout the story.  I thought this was a good first book in the series and I will definitely be reading the next book in A Kensington Palace Chef Mystery.  Kale to the Queen will be out on Tuesday, April 11.

I hope each of you have a trouble free Monday.  I will be back tomorrow to evaluate The Night the Lights Went Out by Karen White.  I am currently reading One Perfect Lie by Lisa Scottoline. Take care and Happy Reading!