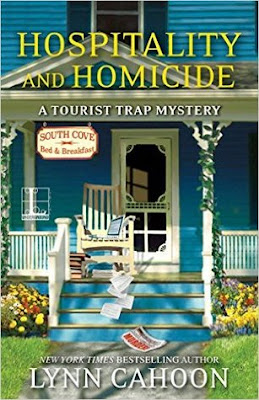 It's Wednesday!  We are halfway through the week.  I am taking my mother for an MRI today.  They were unable to get any usable images on her last visit (she kept falling asleep).  There is no guarantee she will stay awake this time either (she drops off to sleep so easily).

Hospitality and Homicide by Lynn Cahoon is the eighth book in A Tourist Trap Mystery series.  Jill Gardner lives in South Cove, California and owns Coffee, Books and More.  Nathan Pike, mystery author, has arrived back in town to work on his latest novel.  He will be staying at the South Cove Bed and Breakfast.  Greg King, South Cove PD’s only detective and Jill’s boyfriend, is less thrilled with his presence since Nathan will be shadowing him for the next month.  On the weekend, Jill, Greg, Aunt Jackie and her beau, Harold along with Nathan visit the Jensen Farm.  There is an old olive tree on the property that is called the Judas tree (scene of several suicides).  One evening Greg and Jill are preparing to cook dinner when Greg brings up the idea of them moving in together.  Jill is unprepared for Greg’s suggestion and glad when he is called away to a crime scene.  Jill later hears that the owner of the Beal Street B&B, Walter Knicely, was found murdered on the Judas tree.  It turns out that the scene was staged just like a scene in the novel Nathan is writing.  Nathan becomes a prime suspect in Walter’s death.  Jill’s curiosity soon has her working to solve this latest murder.   But Jill cannot devote all her time to the case.  She is contemplating letting Greg move in with her.  Jill is not sure if she is ready for such a big step (she has yet to tell Greg those three special words).  Of course, everyone in town has an opinion (and has placed a bet on the outcome).  Then there is the missing boy and interviewing perspective employees.  Life is never dull in South Cove.

Hospitality and Homicide is easy to read, and it has a good pace. Ms. Cahoon has a lovely, conversational writing style.  It was nice to revisit the characters in the series and see how they are getting along.  I found Hospitality and Homicide to have more of the cozy element than most cozy mysteries.  More time is devoted to Jill working, going to school, jogging, dating, walking Emma and eating.  We get to see how Aunt Jackie is faring with her new beau, check up on the romance between Sasha and Toby, and discover Esmerelda’s problem with her latest client.  The mystery was very simple and extremely easy to solve.  The suspect pool is exceedingly limited.  The motive for the murder is feeble.  The books in A Tourist Trap Mystery series are best read in order.  Otherwise, you will be a little bewildered (missing important bits of information).  I give Hospitality and Homicide 3 out of 5 stars.  Several things are repeated throughout the book (examples:  Jill’s dislike of her business class, Jill states she is afraid of Aunt Jackie’s wrath when she is late or forgets something, Jill being afraid to commit to Greg or say I love you to him).  I found a couple of contradictions in the book.  Nathan Pike’s character is described one way at the beginning of the story (afraid of crowds for example) and later is very chatty and a charmer.  I found the case of the missing child to be confusing.  At one point, it is stated that the courts have declared the young boy to be dead which was why the police were no longer looking for him.  Later, it seems the boy has only been missing a short time (days).  Which is it?  I am hoping for a more complex mystery and more attention to details in Killer Party, the next book in A Tourist Trap Mystery series.

I appreciate you visiting today.  I am currently enjoying Bearly Departed by Meg Macy.  I will return tomorrow with my thoughts on Love Me Not by M.J. Arlidge.  I hope each of you have a wonderful Wednesday. Take care and Happy Reading!