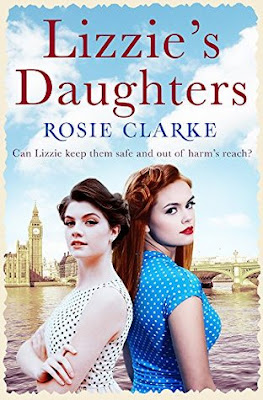 Welcome!  Rosie Clarke writes The Workshop Girls series which features Lizzie's Secret, Lizzie's War, and Lizzie's Daughters. Some of her other novels are Jessie's Promise, The Downstairs Maid and the Emma trilogy.  An upcoming novel of Ms. Clarke's is The Girls of Mulberry Lane which will be released on August 1.


Lizzie’s Daughters by Rosie Clarke is the third book in The Workshop Girls series.  We travel back to 1958 in London, England where we join Lizzie Winters and her family.  Lizzie is married to Sebastian Winters, and they have two daughters, Betty and Francie.  Betty is seventeen, naïve, stubborn, spoiled and headstrong (very much like her birth father).  Francie is fourteen years old and currently at an art college. She is a talented artist. Lizzie owns Lizzie Larch Hats and has workrooms that construct her designs.  Betty wishes to quit school and go to work in them.  Sebastian, her stepfather, wishes for her to get an education and insists she stay in school.  Betty has been going out to the clubs at night and has met Pierre Saint-Jacquez.  Betty fancies herself in love with Pierre and, after a nasty argument with Sebastian, she disappears with him.  But will life in Paris be what Betty expects?  Francie entered a contest with Styled magazine and won second prize.  She is thrilled with the tickets to a fashion show (the prize she wanted).  But when the first prize winner doesn’t turn up, Francie finds herself modeling at the show. Francie is then roped into modeling for photo shoots and her school career is in jeopardy.  Lizzie has been told not to get pregnant again, but she wants to provide Sebastian with a son.  She finds herself with child and put on bed rest.  Francie is brought home to take care of Lizzie while Sebastian heads to Paris to locate Betty.  Before Sebastian can complete his mission in Paris, he is sent to East Berlin.  Sebastian has been trying to locate an old friend’s daughter for three years, and she has finally been found.  It will be a dangerous trip to get her out of country and back to England.  To see how the story ends, pick up Lizzie’s Daughters.

Lizzie’s Daughters is well-written and engaging.  I liked the characters, the settings and the time period.  It was a captivating time in Europe as nations slowly recovered from the war and the Cold War was just beginning (East Berlin had yet to erect the Berlin Wall).  I found Lizzie’s Daughters easy to read and it had a decent pace (a couple of slow sections).  Rosie Clarke is a descriptive writer and tends to get a little wordy.  There are several storylines going on in the story (as you can tell), but they are not overly complicated (or difficult to keep track of).  I give Lizzie’s Daughters 4 out of 5 stars.   Lizzie’s Daughters is a British novel so you will find the spelling of some words different.  Lizzie’s Daughters is the third book in the series, but is easily a stand-alone.  I do want to go back and read the first two books in the series (curious to see where it all started).  I did feel the book was a little long.  I felt a little editing would have enhanced Lizzie’s Daughters.  Betty’s naivete did begin to wear on me after a time.  I did not believe she would ever wise up to the ways of the world.  I was disappointed with the ending.  It was incomplete (needed an epilogue).  I do hope that there will be another novel in The Workshop Girls series (so I can find out what happens).

Posted by Kris Anderson, The Avid Reader at 9:00 AM