The Coloring Crook by Krista Davis: A Pen & Ink Mystery 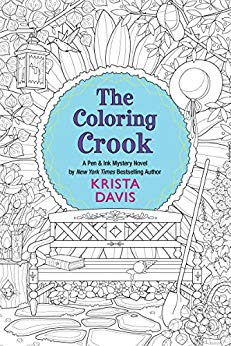 Good Day!  It is the last day of November.  My sister (Happy Birthday, Nicole) and my maternal grandmother were both born on this day. Wine and Punishment by Sarah Fox along with Steamed Open by Barbara Ross, Valentine Candy Murder by Leslie Meier and Hooks Can Be Deceiving by Betty Hechtman come out on December 18.  Now is the time to hint to your loved ones that you want an Amazon gift card (or one for your favorite book shop) for Christmas.

The Coloring Crook by Krista Davis is the second A Pen & Ink Mystery.  Florrie Fox is the manager of Color Me Read, a bookstore in Georgetown, Washington D.C. She also creates adult coloring books in her spare time.  Dolly Cavanaugh is introducing Florrie to estate sales and how you can sometimes find a diamond in the rough especially at sale run by Percy McAllister.  Florrie leaves Dolly browsing while she hurries off to work.  At the Hues, Brews and Clues Coloring Club later that day, Dolly shows Florrie the wonderful find she uncovered.  Dolly discovered a rare copy of The Florist, the earliest known coloring book which was published in 1760.  As far as Florrie can tell, it is an original.  Dolly left her purse at the store and requested that Florrie drop it off on her way home.  Florrie finds Dolly dead in her apartment clutching a piece of The Florist in her hand and sees someone fleeing out the back.  Dolly posted the news of her find on social media and people are anxious to obtain the rare book which has now disappeared.  When Dolly’s daughter asks Florrie to evaluate her book collection, and Florrie stumbles upon a skeleton hidden behind a bookcase in the attic. Zsazsa Rosca becomes the prime suspect in Dolly’s murder, and Florrie knows someone is setting her up.  Florrie studies the case and digs into Dolly’s past hoping to uncover some clues.  Can Florrie prove Zsazsa’s innocence?  Who is the skeleton in the closet? 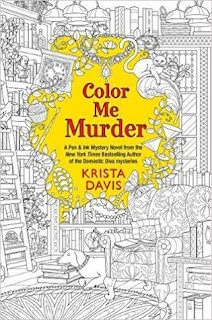 The Coloring Crook can be read alone if you have not had time to pick up Color Me Murder.  There is a colorful cast of characters in this series that aid Florrie in solving the crimes and in running the bookstore.  I like that Florrie creates adult coloring books and that sketching helps her think through the crimes.  The various mysteries in The coloring Crook are woven together into one entertaining cozy mystery.  While the older murder has a complete resolution at the end, I felt the Dolly’s whodunit was not explained completely.  I thought it unrealistic that Dolly’s daughter would be able to dispose of her belonging before the crime had been solved (the will had not been read nor probated).  The Coloring Crook is well-written with steady pacing and developed characters.  There are a number of characters and it can be hard to keep them all straight.  The coloring club for adults is a clever addition and the benefits of coloring is explained (helps stress).  There are many delightful cozy moments in The Coloring Crook.  Florrie’s romance with Eric is progressing nicely and they have something humorous in common.  I am giving The Coloring Crook 4 out of 5 stars (I liked it).  Krista Davis has infused The Coloring Crook with engaging characters, a charming bookstore, a cute cat, mouthwatering food, coloring, friendship, murder, books, romance and mayhem.  I look forward to returning to Color Me Read and Georgetown in the next A Pen & Ink Mystery.   If you pick up a hardcopy of The Coloring Crook, you can color the front and back cover.

Thank you for visiting me today.  I hope I have helped you find a new book to read.  I will return tomorrow to review Tiny House in the Trees by Celia Bonaduce.  It is the third A Tiny House Novel.  May you have an enchanting day. Take care and Happy Reading! 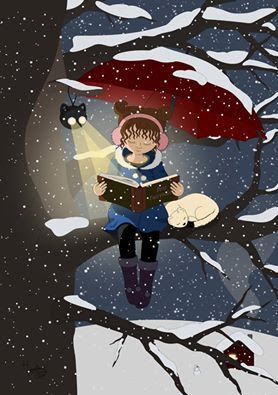