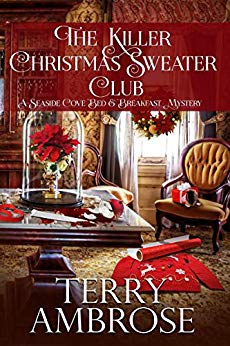 All ten-year-old Alexandra Atwood wants for Christmas is to get her dad and the B&B’s cook Marquetta under the mistletoe. After all, how can they get married if they don’t kiss first?


When murder strikes in Seaside Cove, bed-and-breakfast owner Rick Atwood is asked to help find the killer. But this will not be an easy case to crack. Not only did the killer contaminate the crime scene, but there are suspects all over town. And they all received the same Christmas sweater from the victim.

Alex hears rumors about the murder and decides that since she’s on Christmas break, she has time for a little multitasking. She launches her own investigation even as she continues her efforts to get her dad and Marquetta together.


Just when Rick thinks he’s identified all the suspects, he discovers a new one—his estranged wife. With the days until Christmas ticking down, Rick feels pressured from all sides. He needs to solve the case. He needs to send his wife back to New York. But the one thing he doesn’t need is for his daughter to be one step ahead of him and the cops.

Terry Ambrose is a former skip tracer who tracked down deadbeats for a living. He’s long since turned his talents to writing mysteries and thrillers. Several of his books have been award finalists and in 2014 his thriller, “Con Game,” won the San Diego Book Awards for Best Action-Thriller. He likes cool photography, funny mysteries, and finding the oddest things while walking on the beach.

The Killer Christmas Sweater Club by Terry Ambrose is the third book in A Seaside Cove Bed & Breakfast Mystery.  Alex Atwood is looking forward to Christmas.  She has plans to get her dad and Marquetta Weiss, their cook, to finally kiss with the aid of some strategically placed mistletoe.  Marquetta is like a mother to Alex and she would like the two important people in her life to marry.  Of course, Rick Atwood needs to her divorce her mother first (a pesky little problem).  The Crooked Mast is holding an ugly sweater contest that evening and Alex has an electrifying entry.  Several people end up wearing the same sweater which they received from local attorney, Thorne Waldorf with promises of an apology for his recent behavior.  Unfortunately, it looks like Thorne will not be making the party.  He was found in dead in his home office which has been ransacked.  Deputy Cunningham needs assistance in solving the crime and Rick must honor the promise he made to mayor to act as a police consultant.  Rick has a contaminated crime scene plus a handful of suspects to consider when another person of interest with a personal connection pops up. Alex feels since she was helpful on the last investigation, she should assist with this one.  But Rick does not want to put his daughter in harms way.  The days before Christmas are swiftly passing by and the mayor wants the case solved right away.  Can Rick bag the killer before his party on Christmas Eve? 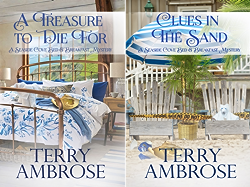 The Killer Christmas Sweater Club is available at Amazon and is a part of the Kindle Unlimited Program.  The first two books in A Seaside Cove Bed and Breakfast Mystery series are A Treasure to Die For and Clues in the Sand.  In honor of the tour, the author is hosting a giveaway.  You can click here to enter or use the Rafflecopter form below.  Before you depart, make sure to leave a comment for an extra entry.  The other stops on The Great Escapes Book Tour include guests posts, reviews, characters guest posts and author interviews. Thank you for visiting today.  Wreath Between the Lines by Daryl Wood Gerber will be featured tomorrow.  The seventh book in A Cookbook Nook Mystery series.  May you have a cozy day.  Take care and Happy Reading!

November 16 – View from the Birdhouse – SPOTLIGHT

November 18 – Here's How It Happened – SPOTLIGHT

November 20 – I'm All About Books – SPOTLIGHT