The Skeleton Makes a Friend by Leigh Perry: My Review, an Excerpt & a Giveaway

The Skeleton Makes a Friend (A Family Skeleton Mystery) 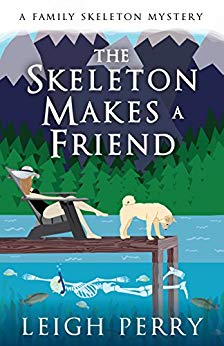 The Skeleton Makes a Friend (A Family Skeleton Mystery)

Georgia Thackery is feeling pretty good about her summer job teaching at prestigious Overfeld College, and she’s renting a rustic cabin right by a lake for herself, her daughter, Madison, and her best friend, Sid the Skeleton. Together again, the trio are enjoying the quiet when a teenager named Jen shows up looking for her friend. Georgia doesn’t recognize the name, but she learns that the person Jen was looking for is actually Sid.

Sid reveals that he and Jen are part of a regular online gaming group that formed locally, and one of their members has gone missing. Sid admits that he might have bragged about his investigative prowess, enough so that Jen wants him to find their missing player. Given that Sid doesn’t have many friends offline—none, really, unless you count the Thackery family—Georgia agrees to help him search. They manage to discreetly enlist Jen, who lives in town, and follow the clues to... a dead buddy.

Now they've got a killer on their hands. Probing the life of Sid's friend, they realize a lot is wrong both on campus and in the seemingly quaint town, and someone doesn't want them looking deeper. 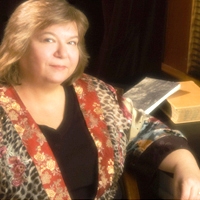 Leigh Perry is the author of A Family Skeleton Mystery Series: A Skeleton in the Family, The Skeleton Takes a Bow

, The Skeleton Haunts a House

, and The Skeleton Paints a Picture 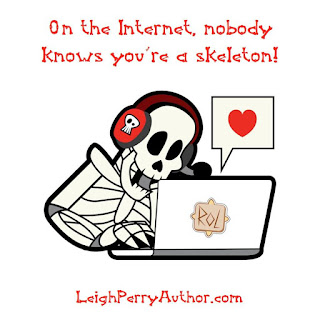 Here is an excerpt from The Skeleton Makes a Friend for your enjoyment:


Sid unzipped the rest of the way, pulled himself out of the suitcase and back together, and tried to turn the knob. “It’s locked.”

“Easy peasy,” he said, pulling a set of lock picks from inside the suitcase. My locksmith sister Deborah probably hadn’t realized that teaching my daughter Madison how to pick locks was tantamount to teaching Sid. Madison had shared everything she’d learned with him, and he’d promptly ordered his own picks online. “You really should learn to do this, Georgia. It’s not that hard.”

Despite his assurance, it seemed to take an awful long time to get the door open. Or maybe it just seemed like a long time because I kept looking down the stairs, worried that somebody would hear us and come to see what was going on.

Finally there was a loud click, and Sid said, “Nailed it!” He opened the door, and cold air streamed out.

“Brr!” I said. “Wouldn’t you know that a department with everybody on vacation would be the one with overachieving air conditioners?” The window unit in my classroom had gone out twice. “Not to mention the waste of electricity.”

“You can complain about it later,” Sid said. “Come on.”

I followed him into the human resources department, pulling the empty suitcase along.

There were four more closed doors: three offices labeled with names and one marked File Room.

“Here we go,” Sid said, using his picks on one of the office doors.

This lock was easier to deal with, which was a relief, but unfortunately, the smell seemed to be coming from that office. “I’m going in.”

“Remember what I said. Get in, look around fast, get out.”

“Got it.” He stepped inside.

Between the cold, the horrid stink, and the fear of being caught, I was hoping that Sid would be swift, but I was surprised when he came out in under two minutes. “That was fast. Did you find something?”

Then I looked at him.

He shouldn’t have been able to look like anything but bone-colored, but somehow he seemed paler than usual, and his bones were so loose he was nearly falling apart. “What’s wrong?”

“Did he see you?” I said stupidly.

He slowly shook his skull, and only then did I realize what it was we’d been smelling.


The Skeleton Makes a Friend by Leigh Perry is A Family Skeleton Mystery series.  Georgia Thackery along with her daughter, Madison and best friend and skeleton, Sid are spending the summer in Overfeld, New Hampshire.  Georgia is teaching a creative writing seminar as part of a high school enrichment program at Overfeld College.   The three of them are swimming in the lake when Jen Cater shows up looking for Skalle Beinagrind.  Skalle is a gaming friend of Jen’s from Runes of Legend who was bragging about his expertise as a private investigator.  One of their fellow players, Erik Bloodaxe has gone missing and Jen wants to enlist Skalle’s help in locating him.  Georgia quickly deduces that Jen is looking for Sid (use translator on Skalle Beinagrind).  While Sid cannot meet with Jen in person (for obvious reasons), he does want to help locate their fellow player.  Sid sifts through the online information on Erik to track down his real world identity.  Erik works at Overfeld College, but he has played his last game.  Sid and Georgia find him dead and it looks like he has been there for a few days which explains the malodorous stench in the building.  The duo uncover problems at the college and the culprit has no intention of stopping his deadly game.  Can the duo expose the killer in time? 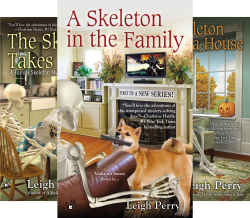 The Skeleton Makes a Friend is a humorous cozy mystery with delightful characters.  Sid is one of those characters that you cannot help but love.  He is a skeleton with a quirky personality and a zest for life.  He has been Georgia’s best friend since she was a little girl (he saved her life at a carnival).  Thanks to the advent of Wi-Fi, Sid can now have online friends in addition to the Thackery family.  The Thackery’s have come up with creative solutions that allow Sid to go out in the world (the bowling bowl tote bag is ingenious).  Madison is back in this tale and she gets involved with the mystery.  I just love the interactions between Georgia, Sid and Madison along with their creative curse words.  The mystery is complex with misdirection.  Readers get clues as Georgia and Sid investigate the victim, suspects and the college.  While The Skeleton Makes a Friend is the fifth A Family Skeleton Mystery, it can be read alone.  Georgia and Sid’s backstory is provided so new readers will not be lost.  I thought The Skeleton Makes a Friend was well-written and plotted with developed characters.  The story has smooth transitions and moves along at a brisk pace.  I especially appreciate that there are no loose ends at the end of the story except where Georgia will work in the fall.  The Skeleton Makes a Friend is a light and lively tale that will tickle your funny bone. 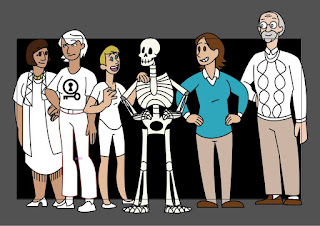 The Skeleton Makes a Friend will be out on November 6 and can be purchased on Amazon, B&N, and Kobo .  The author is hosting a giveaway in honor of the tour.  You can click here to enter or use the Rafflecopter form below.  Thank you for stopping by today and I hope you have found a new book to add to your TBR pile.  I will return tomorrow with my review of A Wrench in the Works by Kate Carlisle.  Take care and Happy Reading!

November 7 – A Chick Who Reads – REVIEW

November 9 – Escape With Dollycas Into A Good Book – REVIEW

November 12 – Here's How It Happened – REVIEW