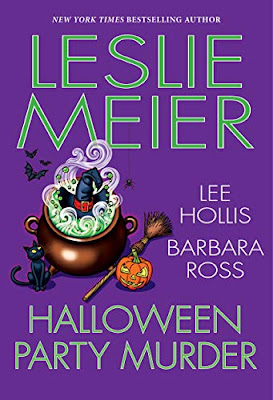 Book Summary
Small town traditions are celebrated throughout Maine during the holiday season. But when it comes to Halloween, some people are more than willing to reap a harvest of murder ...
HALLOWEEN PARTY MURDER by LESLIE MEIER
Tinker's Cove newest residents Ty and Heather Moon turn their Victorian home into a haunted house to raise funds for charity. But the Halloween fun turns to horrific fright when Heather overdoses on tainted drugs--and Ty finds himself accused of murder. Digging deep into the story, journalist Lucy Stone uncovers some sinister secrets in the Moons' past linked to a conspiracy in her hometown...DEATH OF A HALLOWEEN PARTY MONSTER by LEE HOLLIS
Everyone attending Island Times Food and Cocktail columnist Hayley Powell's Halloween bash is dressed as their favorite movie monster from the Bride of Frankenstein and Jaws to Chucky and Pennywise the clown. But when partygoers stumble upon Boris Candy's bludgeoned costumed corpse, it falls to Hayley to discover who among her guests wanted to stop the man from clowning around permanently...SCARED OFF by BARBARA ROSS
Three teenage girls having a sleepover on Halloween night get spooked when high schoolers crash the house for a party. But no one expected to find a crasher like Mrs. Zelisko, the elderly third floor tenant, dead in the backyard--dressed in a sheet like a ghost. With her niece traumatized, Julia Snowden must uncover who among the uninvited guests was responsible for devising such a murderous trick.. 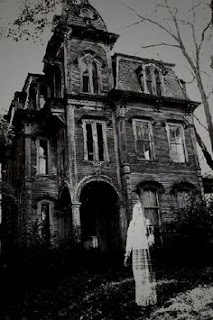 Halloween Party Murder by Leslie Meier, Barbara Ross, and Lee Hollis contains three fun Halloween themed novellas.  Halloween Party Murder by Leslie Meier, Death of a Halloween Party Monster by Lee Hollis, and Scared Off by Barbara Ross are the three novellas.  Each novella relates back to a series written by that author (A Lucy Stone Mystery, A Hayley Powell Food & Cocktails Mystery, and A Maine Clambake Mystery).  The three stories go well together with all of them set in Maine and involving a Halloween Party.  I enjoyed reading all three Halloween-themed stories.  Lee Hollis’ was intriguing as it was a closed room mystery.  It has Hayley Powell trying to figure out which of her guests could have committed murder.  Halloween Party Murder by Leslie Meier picks up where Haunted House Murder ended.  A haunted house turns deadly.  Scared Off has Julia’s niece calling for help when a sleepover ends up with an out-of-control party.  The police arrive to find the homeowner’s renter dead in the backyard.  All three books are well-written with great characters and steady pacing.  It is fun catching up with the characters from these entertaining cozy mysteries. These are three fun Halloween treats. Halloween Party Murder contains three spooktacular tales that have Halloween hijinks, mysterious murders, a creepy clown, startling screams, troubled teens, problematic party, and three stellar sleuths. 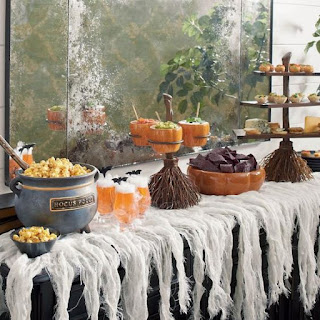 Halloween Party Murder is available from Amazon*.    A Hayley Powell Food & Cocktails Mysteries here.  Lee Hollis' novels here on Amazon. Lee Hollis has Murder at the Bake Sale publishing November 30.  It is the 2nd A Maya and Sandra Mystery.  You can find the other A Maine Clambake Mysteries here.  Barbara Ross has Jane Darrowfield and the Madwoman Next Door releasing December 28.  It is the 2nd A Jane Darrowfield Mystery.    You can find all of Barbara Ross' novels here.  You can find Leslie Meier's A Lucy Stone Mysteries here.  Easter Bonnet Murder is the next A Lucy Stone Mystery and it will be out on January 25, 2022.  You can find all of Leslie Meier's books here.  Thank you for visiting me today.  I am taking Sunday off and will return on Monday with Deadly Summer Nights by Vicki Delany.  It is the first novel in A Catskill Summer Resort Mystery series.  I am a stop on the Great Escapes Virtual Book Tour for this novel.  There will be an excerpt, recipe, and a giveaway.  Please find a moment to stop by.  I hope that you have a fun weekend.  Take care, be kind, and Happy Reading! 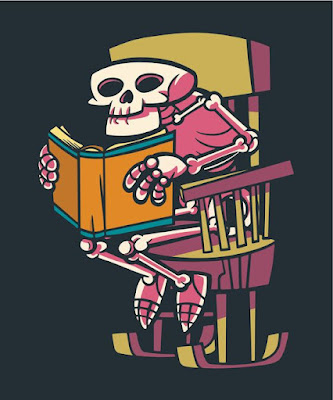