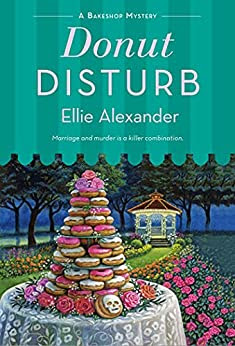 Book Summary
The filling is looking grim for pastry chef and amateur sleuth Juliet Capshaw in Donut Disturb, the next in Ellie Alexander's beloved Bakeshop Series.
Love is in bloom in Ashland, Oregon. The Shakespearean hamlet is bursting with fresh spring energy. Fragrant lilacs and the sweet aroma of vanilla cake fill the air as everyone in town gathers at Lithia Park for the celebration of the year—Thomas and Kerry’s wedding.It’s a picture perfect day. Guests gather on picnic blankets in front of the bandshell to watch Kerry walk down the aisle and wed Ashland’s favorite detective in training, Thomas. Jules and her team at Torte have been tasked with catering the outdoor reception and everything is going according to plan, until a wedding crasher shows up. 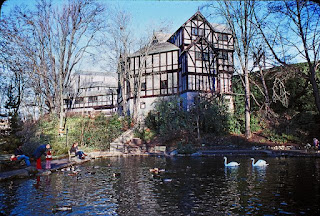 The uninvited guest isn’t just someone looking to score a free glass of champagne. It’s Kerry’s estranged father who is supposed to be behind bars. Kerry is distraught. Jules vows to do everything she can to make sure that there are no other surprises on her friend’s big day. But when the bassist for Heart Strings, the wedding band, is found stabbed with the blunt end of his instrument Jules’s promise takes on new meaning. Now she’ll have to slice through the five tiered cake and a bevy of potential suspects in order to track down a killer before they turn the knife on her. 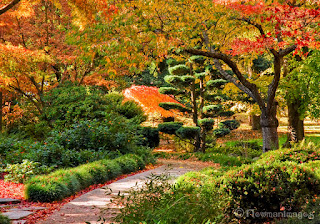 My Thoughts
We are returning to Ashland, Oregon for Thomas and Kerry’s wedding in Lithia Park.  Torte is catering the food as well as providing the wedding cake, groom cake, and the donuts the couple requested.  A few days before the wedding, a frantic Kerry requests Jules help.  Her father has arrived in town.  Kerry has worked hard to overcome her past and the last thing she wanted was for her jailbird father to appear.  Jules hopes this will be the last surprise before the big day.  The weather has cooperated for the wedding day.  Jules goes to retrieve an extra table for the setup from the storage area in the park.  Jules stumbles upon one of the band members stabbed with a piece of his bass.  Unfortunately, Kerry’s father was the last person seen with the victim before his death.  Kerry asks Jules to help with the case since she will not be in town.  Kerry knows her father is capable of many things, but murder is not one of them. Jules soon learns that there are a number of potential suspects.  Jules will need to work quickly if she is to solve the crime before Thomas and Kerry return from their honeymoon. 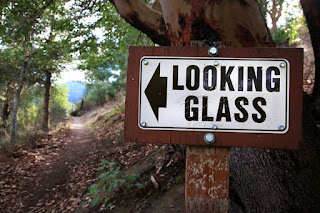 Donut Disturb by Ellie Alexander is the 15th A Bakeshop Mystery.  It can be read as a standalone if you are new to the series.  I found Donut Disturb to be easy to read.  I like the author’s writing style.  It is light and casual.  Jules and Carlos have settled into their new home and are enjoying their time together.  Both are busy but they make sure to make time for each other.  I enjoyed learning more about Kerry. We finally learn about her background and why she is the way she is (totally makes sense now).  There is plenty of baking and cooking.  The food descriptions will have your mouth watering.  Brett, a bass player with Heart Strings, ends up dead in a park storage area.  Jules stumbles upon the scene.  I found it odd the way Jules acted upon seeing the victim.  This is not her first rodeo.  By now, Jules should be used to seeing dead bodies (I do not expect her to be casual, but I did not expect her to act like this is the first time she has seen such a sight).  I expected her to take note of the scene and any potential clues.  I did not expect her to freeze up and go into shock.  In fact, Jules seemed to freeze up frequently.  Whenever she would end up alone with a suspect, she acted like they were going to attack her any second.  Jules is a smart woman who has to think on her feet in the bakery.  I expected her to be logical and no act like a scaredy cat.  I could excuse it once, but it happened multiple times.  There are several suspects in this whodunit along with a red herring or two.  There are good clues to help readers solve the crime before the reveal.  I enjoyed the lovely word depictions of Lithia Park.  It is a lovely park, and I can see why the wedding took place in that location.  Donut Disturb is an upbeat cozy mystery with an offender father, park nuptials, a stabbed bass player, the problematic Richard Lord, curious clues, delicious donuts, and a tricky takedown. 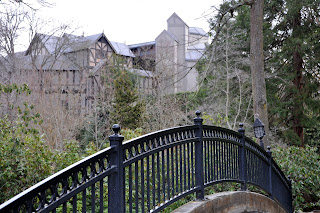 Donut Disturb will be out on Tuesday, June 28 and it is available for preorder from Amazon*. The next A Bakeshop Mystery is Muffin but the Truth which will publish on December 27.  You can find the other A Bakeshop Mysteries here.  You can follow Ellie Alexander on Amazon to receive an email when has a new book coming out.  The park pictures above are of Ashland's Lithia Park where Kerry and Thomas had their wedding in Donut Disturb.  Thank you for joining me today.  Tomorrow I am discussing Muddled Through by Barbara Ross.  It is the tenth A Maine Clambake Mystery.  I finished the raised garden beds down the one side of my house.  I am now planning my next area of attack.  I have a raised bed to install in front of our screened in porch and one to do behind my mother's bedroom.  I have to get rid of the planters that are currently there first before I can proceed (they are falling apart).  I will have to move inside soon, though, because it is getting way too hot to work outside.  It will give me a chance to get the painting done inside and get the various items put together. My mother has a cabinet for her bathroom at the top of my "To Do" list.   I hope that you have a lovely day.  Take care, stay cool, and Happy Reading! 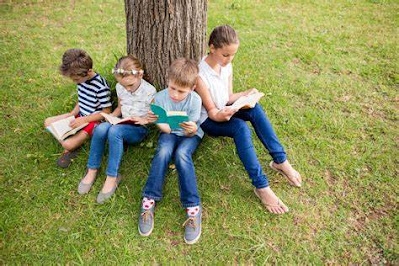