The Silence of the Chihuahuas 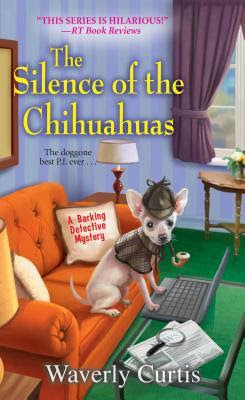 We are halfway through the week!  Today is Occult Day!  This is the day you can bring out your Ouija board (unless, like me, someone in your family got rid of it).  I want to apologize for the delay in posting some of my reviews (like today's).  I got behind while my father was ill (he wanted to stay at home), but I am working to catch up.

The Silence of the Chihuahuas by Waverly Curtis is the fifth book in the Barking Detective Mysteries.  Geri and Pepe (her Chihuahua) have started the Sullivan and Sullivan PI Agency in Seattle, Washington.  However, Pepe has quit talking, and Geri does not understand why he has suddenly stopped talking.  She has taken him to the vet, but the vet just looks at her like she is nuts (do you blame him).  Her therapist believes Geri needs to a little rest and recommends some time at a clinic.   Geri goes to talk to her friend, Brad Best and finds his shop closed.  Geri talks to Brad’s partner, Jay.  Jay has not seen Brad in days (and has yet to report him missing).  Geri decides to visit a client of Brad’s to see if he has been over there lately.  Unfortunately, Geri finds Mrs. Fairchild dead in her kitchen.

Brad is the number one suspect in Mrs. Fairchild’s murder.  Geri and Pepe set out to find who killed Mrs. Fairchild and what happened to Brad.  Geri gets a call from her sister, Teri asking for help.  Geri has not heard from Teri in years.  The caller ID states Forest Glen Clinic.  When Geri calls the clinic, they claim not to have a guest by that name.  Geri decides to check it out for herself.  Pepe definitely smells Tina in the clinic.  Geri decides to take her doctor’s advice and have a little rest (i.e. time to snoop).  Why not take that rest at the Forest Glen Clinic?  Can Geri and Pepe find Teri in time?

I’m sorry but there was just too much going on in The Silence of the Chihuahuas.  It was enough with the murder of Mrs. Fairchild and Brad being missing.  The story really did not need the third mystery of the sister.  And I have not told you everything.  There is also the boyfriend, Felix Navarro.  He is a pet therapist and trying to get on a new show called Pet Intervention (the producer of Dancing with Dogs).  In addition, we have Jimmy G. (Geri’s former boss) who talks about himself in the third person (which is extremely annoying).  I found the murder was easy to solve as well as what happened to Brad (it was obvious).  I just found The Silence of the Chihuahuas to be over the top on silliness.  I liked the idea of the talking dog (who does not imagine their pet talking) and his blog posts were hilarious.  I give The Silence of the Chihuahuas 3 out of 5 stars (it was okay).  The Silence of the Chihuahuas can be read alone, but it would be more beneficial if you read the other books in the Barking Detective Mysteries.

The other books in the Barking Detectives Mysteries are: Dial C for Chihuahua (on Kindle Unlimited), Chihuahua Confidential, The Big Chihuahua, A Chihuahua in Every Stocking (Book 3.5 a novella), and The Chihuahua Always Sniffs Twice.  I received a complimentary copy of The Silence of the Chihuahuas from NetGalley in exchange for an honest review.

I am currently reading Whistling Women by Kelly Romo (I am trying very hard to catch up on my reading list).  I hope everyone has a great hump day!  Take care and Happy Reading!