Murder in the Secret Garden 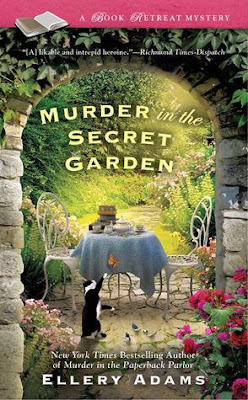 Happy Wednesday!  I hope all of you have had a good day so far. Are you with familiar with the author Ellery Adams?  Ms. Adams is an excellent writer with some delightful book series.  The Charmed Pie Shoppe Mystery series, A Books by the Bay Mystery series, and A Book Retreat Mystery series are my favorites (though all of her books are very good).   If you are not familiar with her work, please take a moment to check out her books.  You will not regret it.

Murder in the Secret Garden by Ellery Adams is the third book in A Book Retreat Mystery series.  Jane Steward, resort manager, is getting ready for a wedding at Storyton Hall as well as The Medieval Herbalist group (who are all knowledgeable in poisons).  The bride, Victoria Billingsley and her sister, Hannah are members of the group.  In the Henry James Library, Mr. Sinclair has a rare herbal manuscript on display for the group (from their secret collection).  Jane’s boys (Fitz and Hem) are excited about the inaugural rubber duck race to take place in town in the Storyton River.  The race is sponsored by Storyton Outfitters, a new shop, owned by Phil and Sandy Hughes (the duck descriptions and names are humorous).  When Jane’s uncle favorite hat falls into the river, Jane volunteers to capture it for him.  Jane finds the hat along with the body of Kira Grace, a guest from Storyton Hall and a member of The Medieval Herbalist.  Jane hopes that this does not put a damper upon the wedding festivities and rallies the Fins to investigate Kira’s death.  Things take an unexpected turn when Edwin Alcott returns (just as Jane finds Kira’s body).  Jane is not sure what she feels for Edwin.  Is he a book thief?  Why radio silence for the last four months?  But Jane has a full plate and no time to speculate (rhyming unintentional).  The wedding goes off without a hitch and the reception is lovely with its Hildegard von Bingen’s theme.  Jane is enjoying the event until Mr. Sinclair informs her that the rare herbal manuscript they had on display has been stolen (not good).  What else can happen?  The next day the Medieval Herbalist take a trip into the hills to visit a druid.  Claude Mason, president of the group, talked Tom Green (owns the local nursery) into taking them (despite the fact that the druid does not tolerate visitors).  Jane is curious and follows along behind the herbalists.  After they leave, Jane hears screaming coming from the druid’s cabin.  The poor man was poisoned with wedding cake.  Is his murder related to Kira’s death?  Jane is even more determined to find who is responsible for the murders and theft (and deflect attention from Storyton Hall).  Join Jane and the Fins on their investigation in Murder in the Secret Garden!

Does the book sound intriguing to you? The above is only a summary of the novel (there is so much more).  Murder in the Secret Garden captured my interest from the very first page, and I did not want to stop reading (I stayed up until I finished the novel).  The book has developed characters, a wonderful setting (a retreat full of books), and a complex mystery.  The novel is easy to read and has a good pace (flow).  While Murder in the Secret Garden is the third book in the series, you can read it as a stand-alone.  The author gives the reader the needed background information on Jane and her family, Storyton Hall, and the mission of the Fins.   Though I highly suggest you go and read the other book in A Book Retreat Mystery series.  They are wonderful.  I give Murder in the Secret Garden 5 out of 5 stars (I loved it as you can tell).  I was able to solve the mysteries (the two murders and the theft of the book).  They were complex with lots of twists and turns. You have to pay very close attention to the details to be able to figure them out.  I loved the description of Storyton Hall.  The room names are all literary.  If Storyton Hall was real, I would never want to leave.  The Harry Potter references (and the games played by the boys) were entertaining (made me laugh) especially when the Fitz and Hem were playing with the mandrake root.  I look forward to reading the next book in A Book Retreat Mystery series.

The other books in A Book Retreat Mystery series are .  You can follow Ellery Adams on Amazon and Facebook (she has some great contests). I received a copy of the novel in exchange for an honest evaluation of the book.  The comments and opinions expressed are strictly my own.

I want to thank you for visiting.  Make sure to take time for yourself tonight.  Every person needs a chance to relax and have a little quiet time (I sure can use some right now). Take care and Happy Reading!