Everything Belongs to Us 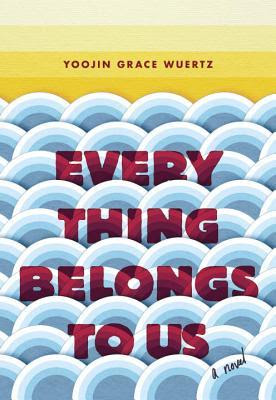 Greetings!  The beginning of a new week.  I have to work on one of my daughter's birthday gift today.  I realized yesterday that her birthday is in four days.  I think I have procrastinated long enough. I also have to make the very special GrandmaBertie cake (after my mother who originally made this cake).  It is a white cake topped with whipped cream (tinted pink from the cherry pie filling juice).  There are chopped walnuts and cherries (from cherry pie filling) in between the layers and on top.  There are some additional items added into the batter (the secret ingredients).  I am told that it is delicious (I am not a fan of cake).

Everything Belongs to Us is a debut novel by Yoojin Grace Wuertz.  It is 1978 in Seoul, South Korea.  Jisun, Namin, Juno and Sunam are all going to college, but each one of them is different.  Jisun and Namin are friends, though, they are from very different backgrounds.  Jisun is from a wealthy family and she protests every single thing her father believes in. She has joined the underground activist movement despite her father’s efforts to curtail her activities. Namin’s parents work hard running their food cart while Namin studies to become a doctor.  She needs to graduate and then help her family especially her disabled brother.  Juno Yoon is a member of the Circle and Sunam would like to join.  Juno has become Sunam’s mentor in teaching him the right way to behave (basically, Sunam does Juno’s bidding).  Their college years are just the beginning.  Read Everything Belongs to Us to see how these four students evolve and where they eventually end up.

I had a hard time reading Everything Belongs to Us.  It took me three tries to get through the whole novel.  The story shows people at each end of the spectrum.  We can see how money can corrupt a person and change their personality.  These young people are discovering who they are and what they want.  I did appreciate the epilogue (even if I did not like how the book ended).  I wish, though, that it had not been written from just one character’s perspective (would have preferred third person).  It was interesting to see how the 70s played out in a different country (one of the reasons I choose to read this book).  I found the writing to be overformal and flat.  It reminded me of some textbooks I read in college.  I could not get involved in the story.  Part of the reason is the wandering storylines.  The book jumps from character to character.  Then we are in the present and then the past.  I was not a fan of the characters (another reason I could not get into this novel).  There are the expected college exploits and the various romantic relationships.  I ended up skimming through sections after a while.  I read the first 1/3 of the book, the middle section, and the last third (it was the best I could do with this novel).  I give Everything Belongs to Us 1 out of 5 stars (I really did not like this book).  The author was very thorough in her details.  Some scenes are a little off-putting.  This novel sounded fascinating, but I was not the right reader for Everything Belongs to Us.

Thank you so much for visiting and reading my review.  I had better get started on that special project.  I hope each of you have a very special day.  I am reading Two Good Dogs by Susan Wilson. I will return on Monday to review Blood and Circuses by Kerry Greenwood.  Take care and Happy Reading!