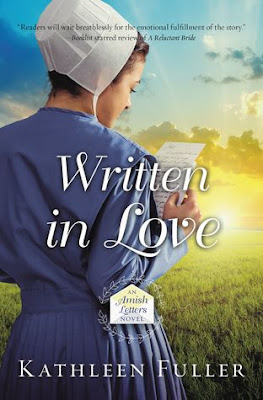 Thank you for visiting this lovely March Sunday.  Did you remember to change your clocks?  I will be glad for the extra daylight in the evenings. I miss that in the winter when it gets dark so early.

Written in Love by Kathleen Fuller is An Amish Letters Novel.  One day Phoebe Bontrager picks up the mail and there is a misdirected letter.  She sends the letter back to the sender with a note.  Soon Phoebe receives a thank you reply from Jalon Chupp.  This is the beginning of their correspondence.  Phoebe is staying with her Aunt Bertha in Dover.  Aunt Bertha is very stern and strict, and Jalon’s letters are a welcome respite.  Jalon lives in Birch Creek and Phoebe’s letters are the high spot of his day.  An accident in his youth has clouded his life and led to many poor choices.  He is now working a construction job, and it actually thinking about the future.  Over the next few months, their letters continue and get longer in length.  Both of them, though, have secrets that they have yet to reveal.  Phoebe has made sure to get the mail each day before her aunt. But then one day, Aunt Bertha comes in with the mail in her hand.  She has opened Jalon’s latest letter to Phoebe.  Aunt Bertha forbids Phoebe from having any more contact with him and destroys the letter.  After three weeks with no letters from Phoebe, Jalon heads to Dover.   Jalon is shocked at how Phoebe is being treated by her aunt and stands up to Aunt Bertha.  This leads to Phoebe being ushered out of the woman’s home (I am putting it nicely).  Jalon suggests that Phoebe come home with him to Birch Creek (properly chaperoned, of course).  These two will need to overcome their pasts in order to have a future together.  Their faith and love will be tested.  Is there a chance for Jalon and Phoebe to be together?

Written in Love is a sweet Amish novel. It is nicely written and has some good characters.  I only told you about three characters in my summary.  My favorite character was Jalon’s sister, Leanna who is an unusual Amish woman.  Leanna is a mechanic and likes to travel.  She has a strong personality yet she is friendly.  I am hoping the author will give Leanna her own book.  The religious aspect is light.  I am glad it is not overwhelming (the author gave it just the right touch). I give Written in Love 4 out of 5 stars.  I wish the author had not taken so long to reveal the characters’ secrets.  By the time, they are disclosed, the reader has already guessed (quite accurately) what the characters were determined to keep hidden. I was frustrated at times by Phoebe and Jalon’s lack of communication.  Phoebe was particularly vexing, but she has a reason behind her reticence.  I liked the basic premise of the misdirected letter.  It is an old-fashioned idea in these modern times.  I am curious to see what will occur in the next book in Kathleen Fuller’s An Amish Letters Novel.  The next book in the series is The Promise of a Letter and it will be out in August.  I am delighted to discover that Leanna will be featured in this book. Written in Love will be out on Tuesday, March 14.

If you enjoy reading Kathleen Fuller's novels, I suggest you join the Kathleen Fuller and Amy Clipston Book Club on Facebook. May each of you have a happy Sunday.  I will be back on Monday to review Elementary, She Read by Vickie Delany.  I hope you will return to see what I thought about this new cozy mystery.  Take care and Happy Reading!