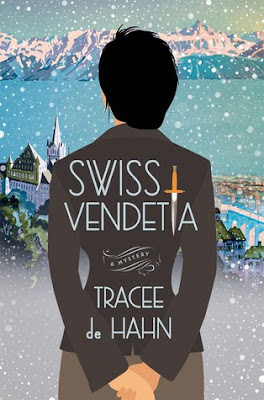 Happy Ash Wednesday and the first day of March.  If you are a fan of paranormal novels, The Accidental Demon Slayer by Angie Fox is free (kindle version) for a limited time (please check price before purchasing). The book contains witches, demons, shapeshifting griffins, and more.  It will have you laughing for hours (and this is just the first book in the series).

Swiss Vendetta:  A Mystery is Tracee de Hahn’s debut novel.  Inspector Agnes Luthi is with the police force in Lausanne, Switzerland.  She has just transferred from financial crimes to the violent crimes unit.  Agnes is trying to get away from the memories of her recently deceased husband and its associations with her former boss, Robert Carnat.  A severe winter storm is blowing into the area when Agnes is called out to her first murder scene at Chateau Vallotton on the shores of Lac Leman.  Agnes has extreme difficulty in getting to the location due to the storm, but she finally arrives.  The body of Felicity Cowell was found near a bench outside the chateau.  Felicity is dressed in a man’s coat and boots over a vintage evening dress.  Felicity had been working at the chateau for the last few weeks evaluating art for the auction house she works for in London.  The storm strands Agnes at Chateau Vallotton without cell phone reception and without power.  Agnes tries to question the Vallotton family and their guests, but they are less than forthcoming.  But, thanks to the storm, Agnes will have extra time to ferret out answers and clues to the killer’s identity.  When Mimi, the six-year-old ward of Daniel Vallotton’s father, goes missing, Agnes will have to work quickly put together all the pieces to identify the perpetrator.  Will she be able to catch the killer before he (or she) strikes again?

Swiss Vendetta has an interesting mystery and a unique setting.  I had an extremely hard time, though, getting through this novel.  It took be three attempts to finish it.  The writing style is formal which makes for difficult reading.  The author liked to use $10 words as my father called them (an example is imperturbability).  The conversations between characters were awkward and stilted. The beginning of the book is slow as Agnes drives to the crime scene (I fell asleep twice).  Then we are introduced to a litany of characters who I could not keep straight (I was finally starting to figure out who was who near the end).  I wish the author had provided a pronunciation guide (it would be helpful).  Agnes is a hard to character to like.  It is understandable that Agnes is grieving the death of her husband, but it overpowered her (and not because of her love for him).  She has two sons to consider, but Agnes is very focused on herself.  We find out the circumstances surrounding the husband’s death in the second half of the book (if you can make it that far).  Agnes was depressed which clouds her outlook (she bummed me out).  I found some information to be repeated and there is quite a bit of speculation on Agnes’ part (since she is snowed in and lacking in evidence).  The novel gets better towards the end of the book.  I give Swiss Vendetta 2 out of 5 stars.  Swiss Vendetta just felt flat and sorrowful.

Thank you for visiting and reading my review.  I am off to do some chores around the house (and sneak in a little reading).  I hope you have a sun filled day!  Take care and Happy Reading!

Posted by Kris Anderson, The Avid Reader at 9:00 AM