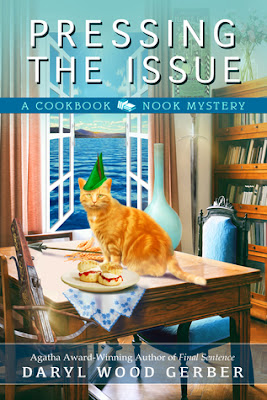 Happy Book Release Day!  Claws for Concern by Miranda James, The Book of Secrets by Melissa McShane, The Tuscan Child by Rhys Bowen, Death of an Honest Man by M.C. Beaton and Pressing the Issue by Daryl Wood Gerber are out today.


Pressing the Issue by Daryl Wood Gerber is the sixth book in A Cookbook Nook Mystery series.  Jenna Hart is busy getting the Cookbook Nook ready for the Crystal Cove Renaissance Fair.  Bailey Bird, though, is of little help since she is out of sorts.  Bailey is getting married in two weeks to Tito Martinez at Baldini Vineyard. Lola Bird has not helped matters by telling Bailey that she has a bad vibe about the nuptials.  Bailey receives a cryptic message from Nick Baldini and it sounds like he is in trouble.  Jenna and Bailey rush to his home to find him on the floor with blood coming from a head wound.  They check for a pulse and find their King of the Renaissance Fair, Nick is dead.  Jenna quickly contacts Police Chief Cinnamon Pritchett who warns Jenna to stay out of the investigation.  The murder weapon turns out to be a winepress that Nick had shown them earlier in the day.  Bailey is thrown into a tailspin. What will happen to her wedding?  Jenna quietly (does not want to incur Cinnamon’s wrath) begins asking questions to find out more about Nick and who could have wished him harm.  Time is running out because soon the Renaissance Fair visitors will be departing, and the killer could be hiding among them.  Who could have committed this dastardly deed?  Will Bailey and Tito have their wedding?

Pressing the Issue can be read alone.  Everything a reader needs to know is included in the book.  Returning to Crystal Cove is like visiting old friends.  It is a charming town with welcoming townspeople, a beach, and inviting shops.  The main characters are warm, friendly and relatable.  It was lovely to catch up with Jenna, Bailey, Kate, Rhett and Aunt Vera.  The descriptions of the Renaissance Fair are vivid.  I enjoyed reading about the costumes, food and activities (the Renaissance Fair speak was entertaining and amusing). It felt like I was there enjoying it with them.  There are delightful book descriptions (cookbooks and some cozy mysteries).  The tantalizing food narratives will have your mouth watering (recipes included at the end of the book).  I appreciated how the author incorporated Charlotte Bessette of Fromagerie Bessette into the story (from the Cheese Shop Mystery series written under her Avery Aames pen name) and her mention of Ohio State University (Go Buckeyes).  The mystery was enticing, but avid cozy mystery readers will find it child’s play to solve.  There are several suspects and some good misdirection that will lead readers down the wrong path.  I do wish that Police Chief Pritchett would start working with Jenna on the investigations.  Cinnamon knows that Jenna’s natural curiosity will not keep her away from looking into a case and Jenna is good at ferreting out information.  I found the ending to be endearing.  I am rating Pressing the Issue 4 out of 5 stars.

The other novels in A Cookbook Nook Mystery series are Final Sentence, Inherit the Word, Stirring the Plot, Fudging the Books and Grilling the Subject.  I will return on Wednesday with my review of Claws for Concern by Miranda James.  May you have an enticing day full of delightful books!  Take care and Happy Reading! 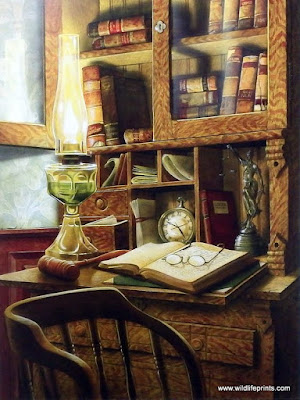