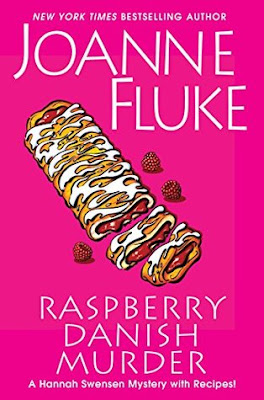 It is the last day of February.  Who Moved My Goat Cheese? by Lynn Cahoon will be released on March 6 along with Plum Tea Crazy by Laura Childs and Who the Bishop Knows by Vannetta Chapman.  Six Feet Under by Tonya Kappes will be published on March 13.  There are some delightful books coming out in March!  I definitely need to add a SD card to my Kindle!

Raspberry Danish Murder by Joanne Fluke is the latest A Hannah Swensen Mystery.  Hannah Swensen Barton is wondering why her husband disappeared two weeks ago.  To get her mind off the conundrum, she is keeping herself busy baking delightful treats for The Cookie Jar. Thanksgiving is just around the corner and people are clambering for baked goods.  Hannah gets a late-night call from P.K. Alesworth, Ross’s assistant at KCOW Television, who is using Ross’ car while his is being worked on.  It is a video call and they (Hannah and Michelle) can instantly tell that something is wrong with Ross.  They witness him crash the car after muttering something about candies in Ross’ desk.  P.K. is rushed to the hospital, but he does not survive.  It turns out that P.K. ingested a lethal dose of a drug that caused a fatal heart attack via candy sent to Ross’ office.  They do not know is if the killer was targeting P.K. or Ross since P.K. has been using Ross’ office at the station.  Hannah dives into the case to get answers.  Along the way, Hannah discovers that she did not know Ross as well as she thought.  Why did Ross leave?  Is he trying to protect Hannah?  Hannah wants answers, and she starts with uncovering P.K.’s killer.

Raspberry Danish Murder is the twenty-second book in A Hannah Swensen Mystery series and it cannot be read alone.  A new reader to the series would be utterly lost.  I did enjoy Raspberry Danish Murder better than Banana Cream Pie Murder, but it still does not have the feel of the earlier books in the series.  The last few books feel as if they are written by someone other than Joanne Fluke. The book has a nice steady pace and smooth transitions.  There is a significant amount of repetition of information (the details of the case).  One character gets some information than repeats it to Hannah, then Hannah tells Michelle and then they must share it with Mike and Norman.  It was completely unnecessary.  The dialogue was stilted, and the characters names were overused.  Hannah is unlike herself in Raspberry Danish Murder.  She is not the strong, confident woman we are used to, and I miss that Hannah Swensen.  She actually worried that Ross left her because she might snore (really).  The two mysteries are interlaced with baking, chatting, cooking, drinking coffee (I do not know how they can drink that much coffee) and munching on cookies.  Every meal and cookie they bake is described in detail.  P.K.’s murder is not the main focus.  There is a limited suspect list, and, to my disappointment, the culprit is easily identified.  The revelations regarding Ross are more interesting.  As more details were revealed, the phrase “marry in haste and repent in leisure” came to mind (I wish the author had not brought Ross into the series).  Hannah was quick to marry Ross and she now realizes that the background information he gave her is contradictory (I would say more but I do not want to spoil it for you).    There is a dilly of a disclosure and cliffhanger at the end of the book (which will have me reading the next book in this series).  There are twenty-nine recipes in the book (too many) and an excerpt from Winter Chill at the end.  I give Raspberry Danish Murder 3 out of 5 stars.  Raspberry Danish Murder is a book for the die-hard Hannah Swensen fans.

Thank you so much for visiting today.  I will be reviewing A Home for Hannah by Amy Lillard tomorrow.  May you have a day full of sunshine.  Take care and Happy Reading! 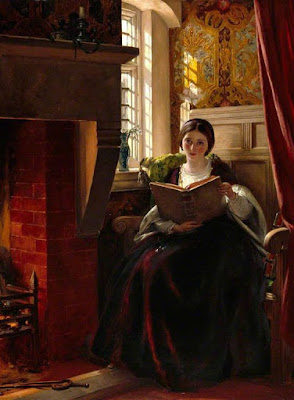 Posted by Kris Anderson, The Avid Reader at 8:00 AM