Better Off Read: A Bookmobile Mystery 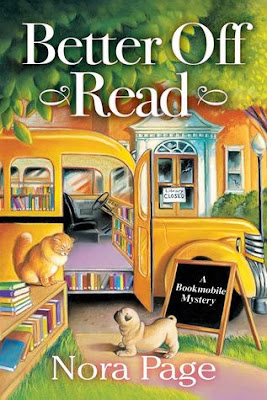 Good Day!  If you enjoy Amish suspense novels, I suggest you investigate Covert Police Detective Unit series by Emma Ashley.  The books in the series include Undercover Amish and Amish Under Fire (both on Kindle Unlimited).

Better Off Read by Nora Page is the first tale in A Bookmobile Mystery series.  Cleo Watkins is the head librarian of the Catalpa Springs Public Library in Catalpa Springs, Georgia.  Unfortunately, a storm recently downed a beautiful old tree right onto the library.  Mayor Jeb Day does not wish to use city funds to revive the library (they have insurance).  Instead, he wishes to make Catalpa Springs a fishing destination with a world class fishing pier and have a floating casino on Tallgrass River.  Cleo still wants to get books out to public and starts taking out Words on Wheels, the bookmobile, out every day.  Cleo has to stop by Krandall House with books ordered by the eccentric Buford Krandall who is in a feud with neighbor, Mary-Rose Garland.  Cleo discovers the front door open, the library in a disarray and Buford dead.  The evidence quickly mounts against Mary-Rose.  Cleo knows her friend did not harm Buford and sets out to prove it with the help of her friends.

Better Off Read is a humorous cozy with a fast pace.  Cleo Watkins is seventy-five and determined to save her library.  The mayor is determined Cleo will retire and repurpose the library.  Cleo is a smart, spunky strong-minded woman who leads a busy life and has a lead foot when driving (I am amazed she has not had her license revoked).  I appreciate her passion for books and helping others find the right books for them to read.  There is a cast of quirky characters to accompany Cleo in Better Off Read.  There is Ollie, her grandson who does not know what he wants to do with his life.  Leanna who works part-time at the library (before the storm) and is going to college to get her degree in library science.  Henry Lafayette who is smitten with Cleo and has a pub named Mr. Chaucer.  Bitsy Givens is president of the Ladies League, married to the local bank president and puts up with her demanding mother-in-law.  Let us not forget Rhett Butler, the library cat who accompanies Cleo on her rounds in Words on Wheels.  While there are some interesting characters, I felt the author introduced too many of them.  They just kept coming and it is difficult to keep them all straight.  I wish the author had limited the number and focused on developing them (they seemed superficial).  Catalpa Springs is a small Southern town in Georgia near the Florida border.  There is Southern hospitality, plenty of food and gossip flows freely and quickly.  There seemed to be one zany antic after another throughout Better Off Read (I just wanted them to stop).  There is an amazing amount of dialogue in the story.  The mystery had some good components, but it gets lost.  I believe when the solution to the murder is revealed, some readers will be scratching their heads.  The book has a satisfying ending that wraps up all the storylines.  I felt that there was too much going on (I could not begin to describe it all).  Better Off Read had a great premise, but the final product was dissatisfying.  My rating for Better Off Read is 3 out of 5 stars.

Thank you for stopping by today and reading my review.  I will return next time with my thoughts on Lost Books and Old Bones by Paige Shelton.  I hope you have a peaceful and relaxing day.  Take care of yourself and Happy Reading! 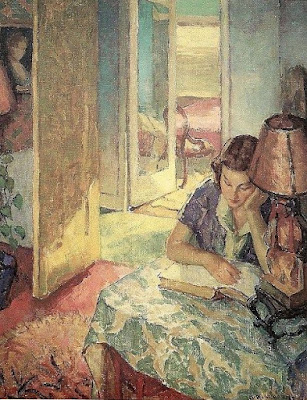