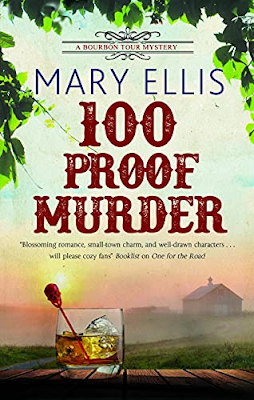 Travel writer Jill Curtis is in Louisville, Kentucky, on the next stop of her bourbon tour assignment, and is keen to explore the local distilleries with her videographer, Michael Erickson - especially since her new beau, Lieutenant Nick Harris, lives in the city.
But the night before Jill's first tour at Parker's Distillery, she is shocked to learn that the master distiller, William Scott, has died suddenly of a heart attack - and even more shocked when she discovers William's daughter, Alexis, suspects foul play. Is there more to William's death than meets the eye? Jill is soon drawn into a deadly blend of rivalry, jealously, and cold-blooded murder as she attempts to uncover the truth behind William's unexpected demise

100 Proof Murder by Mary Ellis has Jill Curtis, a syndicated travel writer, arriving in Louisville, Kentucky to tour local bourbon distilleries.  Jill and her videographer, Michael are enjoying a drink in the bar when they learn that the master distiller of Parker Estate Distillery, William Scott Parker, passed away that afternoon.  Jill has an appointment to meet with the decedent’s daughter and the distilleries operation manager, Alexis Scott Parker the next day as well as tour their facility.  Jill arrives at her appointment to find a distraught Alexis.  She believes her father is the victim of foul play, but Alexis has no idea how to prove it.  Jill, thanks to her recent experience, can aid Alexis in this matter.  Jill soon finds herself entangled in the Scott Parker family drama as she attempts to learn the truth about the master distiller’s sudden demise. 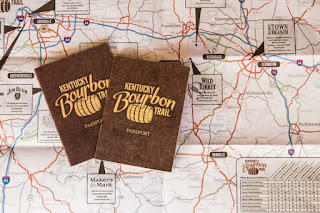 100 Proof Murder by Mary Ellis is the 2nd book in A Bourbon Tour Mystery series.  100 Proof Murder can be read as a stand alone for those who have not read One for the Road.  I thought Jill Curtis being a travel writer was a unique premise for a cozy mystery.  With Jill traveling, there is always a new place for a murder or crime to occur (instead of a large spike in crime in a small town).  I enjoyed the descriptions of Louisville, Whiskey Row, and the area distilleries.  The whodunit is not the focus of this cozy mystery.  The distiller’s death is not even declared suspicious until I was a third of a way through the book.  There are a variety of suspects and a red herring.  I had no problem identifying the guilty party before the reveal (a big clue gives it away).  The majority of the book deals with Jill’s job, Lt. Nick Harris having problem with his mother, Jill’s relatives causing havoc (their antics were hilarious), and Jill and Nick’s relationship.  We follow Jill as she goes about her daily life in Louisville.  There are some glaring mistakes in this book.  Michael’s last name changes late in the book from Erickson to Emerson, Michael’s gumbo because jambalaya, and Kentucky is referred to as the Keystone state (that is Pennsylvania).  The pacing is languid in 100 Proof Murder.  A book with a little over two hundred pages seemed three times as long.  I wanted less romance and more mystery.  This could be an entertaining series with some changes.  100 Proof Murder takes readers to the Bluegrass State where there are tasty tipples, a disconcerting death, raucous relatives, a masculine lieutenant, an absentminded mother, and a vexing videographer. 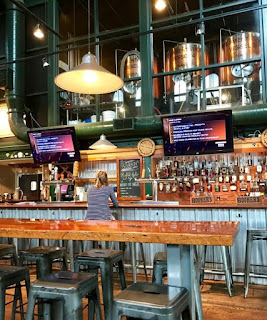 100 Proof Murder is available from Amazon*.  The first novel in A Bourbon Tour Mystery series is One for the Road.  You can find Mary Ellis' other novels here.  Thank you so much for reading my review today.  I will be back tomorrow with To Write a Wrong by Jen Turano.  It is the latest novel in The Bleeker Street Inquiry Agency series.  I wanted to let you know that I could not put together one of the planters.  I opened up the box and read through the parts list.  The planters legs were not included.  How could they forget four legs?  I have emailed the manufacturer (I am not hopeful) asking for assistance.  If I do not get a response, I will send it all back.  I hope that you have a cheerful day.  Take care, be kind, and Happy Reading! 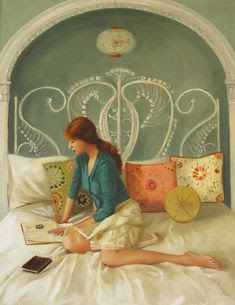