A Bee in Her Bonnet 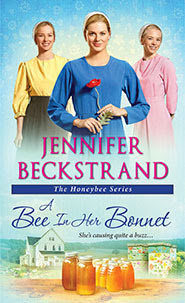 Hello and Happy Friday!  Amanda Flower writes A Magical Bookshop Mystery series (a cozy mystery with magical elements). Ms. Flower has just released the new cover for Prose and Cons (second book in series). I thought I would share this enchanting cover with you!  The first book was very good, and I am looking forward to reading Prose and Cons when it releases on December 6, 2016.

A Bee in Her Bonnet by Jennifer Beckstrand is the second book in The Honeybee Sisters trilogy.  Poppy Christner is not like other Amish young women.  Poppy is headstrong, independent, stubborn, determined (she acts before she thinks) and you get the picture.  She wants to prove that she can do the same things as men (despite her continual bruises, cuts, and broken bones) and does not need the help of a man.  Luke Bontranger is a local carpenter and neighbor. Luke is always trying to help Poppy and protect her (he does not want to see her hurt).  He believes he should protect all women and help them (and that they should only do women’s work—don’t you want to bop him one).  Luke needs to change his way of thinking but then so does Poppy (and quit their fighting).  Can these two stubborn people learn to work together and what happens when they do?    Incidents are still happening at the farm.  They have had bee hives overturned, laundry line cut down and clothes in the mud (and stomped on), the chicken coop destroyed with an axe, the barn door written on with a nasty message (again), and Queenie (the horse) is a victim as well.  Who is behind these awful shenanigans?  Poppy almost caught the culprit, but she damaged her arm in the process (and Luke had to save her).  Will they ever catch the miscreant?  Join the Honeybee Sister for more fun and adventure in A Bee in Her Bonnet.

The first book in The Honeybee Sisters  trilogy is Sweet as Honey. Like a Bee to Honey will be out on August 30, 2016.  I received a complimentary copy of the novel in exchange for an honest evaluation of the book. The comments and opinions expressed are strictly my own.

I will be back later with another book review.  Until then have a fantastic Friday.  Take care and Happy Reading!