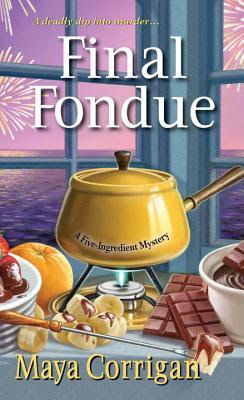 Welcome one and all.  There are some new books coming out next week that you might want to check out.  They are Show Time by Suzanne Trauth and Address to Die For by Mary Feliz.  Both books will be out on July 19.  There are some great books coming out over the next few months.  I will keep you updated (if I am not in jail for attacking my neighbor for revving the motor of his "dune buggy" for hours on end)!

Final Fondue by Maya Corrigan is the third book in A Five-Ingredient Mystery series.  Val Deniston is in for a busy week in Bayport, Maryland.  Bayport’s Tri-centennial Festival is taking place, and Val is running the booth for the Cool Down Café (where she works).  Val has convinced her Grandad, Don Myer, to take in guests for the weekend (will pay for the detective course he is taking).  Jennifer Brown has booked the rooms for herself and members of her bridal party (Fawn Finchley, Noah Hurdly, Sarina Rafael).  Jennifer is in town to make plans for her wedding to Payton Grandsire (son of Penelope Grandsire, rich family in town).  Grandad is also working on his recipe for the cook-off contest (a chocolate fondue).  He has to live up to his reputation as the Codger Cook.  Unfortunately, Chef Henri LaFarge is the judge, and he holds a grudge against Val (he is the one who got her fired from her publicist position).  Val is coming back to the house very late and stumbles in the dark.  Val has stumbled over Fawn Finchley, one of their houseguests.  Val calls in Bayport Police Chief, Earl Yardley.  Who could have wanted Fawn dead?  The suspect list is not long since Fawn was a guest in town (seems to limit it to the houseguests staying with Grandad).  Val is not sure that Fawn was the intended victim.  Val cannot help but do a little investigating.  Of course, Grandad insists on helping (it goes great with his detective course).  Can they find the culprit before there is another victim?  Come join in the hijinks in Final Fondue!

Final Fondue was a fun book to read.  It was enjoyable and easy to read.  There is just the right amount of humor in the novel (it was not over-the-top or too silly).  I liked the mystery (complex and plenty of misdirection) and following the clues to see if I was right in my choice of killer.  I like the relationship between Val and Grandad.  Their banter and slight bickering was entertaining (and you can tell that they truly care for each other).  While this is the third book in the series, it can easily be read alone.  Ms. Corrigan does a good job of updating the reader so they do not feel like they have missed anything by not reading the first two books (though I look forward to reading them).  The characters in the book are well developed and relatable (they seem real).  I give Final Fondue 4.5 out of 5 stars (I more than liked it but I was able to solve the mystery well before it was revealed).  There is plenty going on in Final Fondue, but it was not too much.  Ms. Corrigan did a superb job cooking up this cozy mystery.  I look forward to reading the next book in A Five-Ingredient Mystery series.  There are recipes included at the end of the book (that were mentioned during the novel).

The other books in A Five-Ingredient Mystery series are By Cook or By Crook and Scam Chowder.  I received a complimentary copy of Final Fondue from NetGalley (and Kensington) in exchange for an honest evaluation of the novel.  The opinions and comments expressed above are strictly my own.

I hope you enjoyed my review (or it was at least helpful).  I am off to eat dinner and finish my current book (which is a little strange). May all of you have a relaxing and enjoyable night.  I will be back tomorrow with another review (fair warning)!  Take care and Happy Reading!

Posted by Kris Anderson, The Avid Reader at 8:18 PM