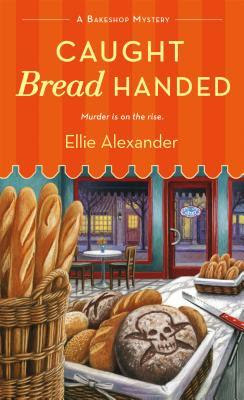 Happy Saturday!  It is an overcast day in my area (very depressing).  I enjoyed a couple of lazy hours reading before I got moving (the cats and dogs were very insistent).  I had a scare the other night.  I was checking on the cats and discovered Lil' Dickens was missing.  Somehow she sneaked out when we let the dogs outside (normally Doozy catches them).  I hunted everywhere for over an hour (checked the sheds, the yard, under the front porch, etc.).  Then about 3:30 a.m. I was letting the dogs out and asked Doozy to see if Lil' Dickens was in backyard (maybe she returned).  Doozy went out and found her by the shed with the lawnmower.  I do not know where she was for those missing hours, but I was glad to see her back.  She is only about 16 weeks old.  We are being extra vigilant now with the door.

Caught Bread Handed by Ellie Alexander is the fourth book in A Bakeshop Mystery series.  Juliet Montague Capshaw has returned to Ashland, Oregon from Lake of the Woods where she had catered an event (and helped catch a killer).  Her husband, Carlos, who had shown up unexpectedly, has returned with her.  Torte, her family’s bakery, is busier than ever.  The only thorn in their side is the monstrosity that has opened up across the street. ShakesBurgers is the new “restaurant” that took over where Jester (a unique restaurant owned by Alan Masterson) used to be.  Mindy Nolan ripped down the Tudor façade and painted the place a neon color.  It sticks out like a sore thumb in this Shakespearian town (home to the Shakespeare Festival theater complex).  Rosalind Gates, president of Ashland Downtown Association, has called an emergency meeting to see about getting rid of the eyesore (or making them put an old looking façade on the place to match the rest of the area).  The next day Juliet finds Mindy Nolan dead in ShakesBurgers.  Rosalind, of course, ends up being a prime suspect.  Juliet starts poking around trying to get answers (and avoid talking to her Carlos).  Time is running out for Carlos and Juliet.  Carlos has to return to the cruise ship soon (where he works) and he would like Juliet to return with him.  But Juliet has found her place in Ashland and Torte.  Is there any chance for their marriage?   Who wanted Mindy Nolan out of the way like day old bread?  You will have to read Caught Bread Handed to get the answers.

Caught Bread Handed is easy to read, has some engaging characters (like the Professor and Helen Capshaw), and is set in a beautiful location.  I feel that Caught Bread Handed is really not a stand-alone book.  The author does update the readers on Juliet’s past and how she came to return to Ashland, but I think it would be helpful to have read the previous novels (or at least the first one in the series).  I felt that Caught Bread Handed is more about a day in the life of Juliet.  The majority of the story talks about baking, cooking (the Sunday Suppers at Torte), Juliet not knowing what to do about Carlos, Carlos teaching Sterling, Juliet ogling Carlos when he is not looking, and more baking.  Pages of the book are devoted to each item Juliet bakes for Torte (the ingredients, the mixing, the baking, the smell) than to the mystery.  We do not get many clues, but the killer is apparent (at least I thought so).  I give Caught Bread Handed 3 out of 5 stars.  I wanted more substance and time devoted to the mystery.  I am also tired of Carlos and Juliet.  It is time to resolve the situation (enough is enough).   One thing I thought was unusual was how quickly a new business opened.  Mindy Nolan and her partner purchased, renovated, and opened ShakesBurgers within two weeks.  It just does not seem plausible (and odd considering such a historic type town).  The next book in A Bakeshop Mystery series is Fudge andJury (scheduled to be released in January 2017).  I will read it and then decide whether or not to continue with the series.

The other books in A Bakeshop Mystery series are Meet Your Baker, A Batter of Life and Death, and On Thin Icing.  I received a complimentary copy of Caught Bread Handed from NetGalley (and the publisher) in exchange for an honest evaluation of the book.

I hope all of you are enjoying your weekend.  I will be back soon to share another book with you.  I am currently reading A Beauty Refined by Tracy Peterson.  Take care and Happy Reading!

Posted by Kris Anderson, The Avid Reader at 7:03 PM