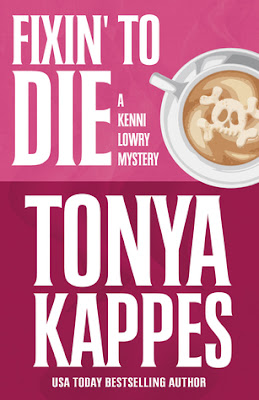 It's Monday and another scorcher!  It was a high of 105 with 62% humidity.  I understand why some people only live in Florida during the winter months (we call them snowbirds).  I figured out how Flappy Doo is turning on the television.  There is a little button on the bottom of the TV that he is hitting when he lays down.  I did not even know the button was there before (I always used the remote).  I have tried to convince him to lay on the nice, carpeted cat tree, but the cat is ignoring me (of course). Cats are very stubborn and independent (most of them).

Fixin’ to Die by Tonya Kappes is the first book in A Kenni Lowry Mystery series.  Kendrick “Kenni” Lowry is the sheriff in Cottonwood, Kentucky.  Kenni was elected two years ago after the passing of her Poppa, Elmer Sims who was the previous sheriff.  Kenni has been lucky that there has been no crime in Cottonwood since she took office (none at all which is extremely odd).  But Kenni’s luck has run out.  She is called out early to Dr. Ronald Walton’s house (where he also had his office).  Dr. Walton was found dead in his home by his receptionist, Toots Buford (only in the South would you find someone with the name of Toots).  There is a strange symbol on the doctor’s wrist.  Later that day White’s Jewelry store is robbed and the same symbol is on the wall.  The two crimes seem to be connected.  Kenni goes the grave of her Poppa (her grandfather) and asks for his help (the townspeople are in an uproar).  After that Kenni starts hearing her Poppa’s voice (she thinks it is in her head).  Then she actually sees him.  At first Kenni believes she is losing her mind, but Poppa soon convinces her that he is real.  Poppa is there to help her.  Kenni also gets help from the Kentucky State Reserve in the form of Finn Vincent.  He is originally from Chicago (so he does not understand the ways of the South-yet).  Finn is assigned to help her solve the two crimes.  This is especially helpful since Kenni’s deputy just retired, and her only other help is the county jailer, Wyatt Granger.  Kenni, Finn, and Poppa set out to find the culprit behind the robbery and murder.  Will they be able to find the person responsible for he/she commits another crime?

Fixin’ to Die is easy to read (and can be finished in a couple of hours), but was a little too silly for my taste.  I had a hard time liking Kenni Lowry (the way she acts).  Kenni goes around town doing her investigation and accusing the wrong people (angering the citizens and losing their cooperation).  Kenni does not read the reports provided to her, question witnesses, or follow-up on forensic evidence (to make sure it actually got where it was supposed to to).  Kenni does not actually solve the crimes as stumble upon the killer accidentally.  I did like the character, Poppa.  He was funny and entertaining (best part of the book).  There is the requisite romance/attraction (of course) between Kenni and Finn.  We also have various town characters like the philandering town mayor and the spoiled, pampered daughter of well-to-do parents.  Kenni seemed to busy socializing, jogging, taking care of dog, playing cards, and ogling the new deputy.  The mystery was good, but I found it easy to solve (the killer is pretty obvious and it can be solved before you reach page 100—if it takes you that long).  I give Fixin’ to Die 3 out of 5 stars.  I think with some tweaking this could be a good book and series. Will I read the next book in the series?  I probably will give the series another opportunity and the reevaluate.   Fixin' to Die reminds me (a little bit) of  A Bailey Ruth Ghost Novel series by Carolyn Hart (which I love to read).

You can follow Tonya Kappes on Amazon and Facebook.  You can also join the Fixin' to Die book club on Facebook. I received a complimentary copy in exchange for an honest evaluation.  The opinions and comments expressed are strictly my own.

I am off to finish some laundry, eat dinner, and then collapse on my bed. I am currently reading Baby Doll by Hollie Overton (I am not enjoying it). I need to save up for my energy for the next two days. I have to convince my Mother to get blood work done and go to a doctor's appointment (wish me luck). May all of you have a nice, relaxing evening.  I will return tomorrow! Take care and Happy Reading!