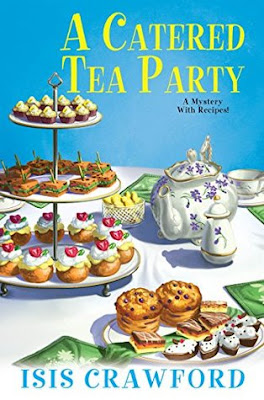 Welcome! I hope all of you are having a superb Saturday.  I have been taking it easy today because of my toe.  It has turned some very vibrant colors and it still swollen.  Only I could manage to break a toe installing a curtain rod!  The bright side is I did not cut off my fingers operating the miter saw!


A Catered Tea Party by Isis Crawford is the twelfth book in Mystery with Recipes series.  Bernie and Libby Simmons own A Little Taste of Heaven in Longely, New York.   They cater events and have a bakeshop.  They have been hired by Ludvoc Zalinsky’s to cater a tea party for the opening night of Alice in Wonderland in the Blue House.  Ticket holders will be able to eat and watch the play.  The Blue House is a new complex that will host plays, an art gallery, and maybe someplace to get a dinner, snack or coffee.  It is all being funded by Ludvoc “Zeb” Zalinsky.  The downside is he is domineering and opinionated.  Zeb recently purchased a very expensive Yixing stoneware teapot ($2 million dollars) and insists that it be the centerpiece in the tea party scene of the play.  The night of the play arrives and the theater is full.  The production is going along well, until they cannot find Zeb.  He is discovered on the kitchen floor—dead!  The tea pot is gone!  It seems that someone sabotaged the electric teakettle (Zeb had a pacemaker and the current from the teakettle killed him).  Casper Cumberbatch, the director, ends up being the prime suspect.  Bernie and Libby know that Casper did not commit the crime and set out to find the real killer (and the teapot).  He may have been a pain in the derriere, but he did not deserve to be murdered.  It turns out that Zeb had many secrets (this does not bode well).  Bernie and Libby are also worried about their father, Sean.  He has begun to date a younger woman named Michelle.  Michelle acts one way in front of Sean, and another in front of the girls.  They do not wish for their father to get hurt by the conniving and manipulative woman (and do not understand why their father cannot see it).  Things take a turn for the worse for Michelle opens a rival shop (with a similar name and menu).  Can they make their father see that they are just looking out for him (and that Michelle is just using him)?  Bernie and Libby have their hands full in A Catered Tea Party.

This is the first book in the Mystery with Recipes series that I have read since A Catered Murder (book one).  I read the first book many, many years ago (before the first kindle came out).  I thought I would see if the series had improved over time (maybe I would like it since I was older).  This book is really not a stand-alone novel.  It helps to have read some of the earlier books in the series (to understand the characters, the town, the relationships) as well as all the extra characters (there are quite a few unusual and eccentric townspeople). The author tried to make the mystery convoluted (confusing), but it was simple to figure out.  One detail was all that I needed to deduce the killer.  The murder occurs early in the novel which makes for a long story (the slow pace did not help).  The writing is satisfactory, and I did enjoy the addition of the secret room and tunnel.  I did find Bernie and Libby’s investigation technique to be a turn off.  They run around town demanding answers (and being rude).  I am surprised anyone visited their shop with their attitudes. I also got tired of the sisters harping on Michelle and their father.  I understand their concern, but enough already with the complaining and whining.  Of course, their father, Sean should have been able to figure out Michelle’s characters (he was the former chief of police).  I give A Catered Tea Party 3 out of 5 stars (it was okay).  I do not believe this is the series for me.

You can find the other eleven book in Mystery with Recipes series on Amazon.  The titles include A Catered Murder, A Catered Wedding, and A Catered Christmas (you get the concept).  You can also follow Isis Crawford on Amazon to get updates on her latest releases.  I received a complimentary copy of A Catered Tea Party in exchange for an honest review.  The comments and opinions expressed are strictly my own.

Thank you so much for reading my latest book review.  May all of you have a blessed evening!  The Masters of Sex marathon starts at 8 p.m. The new season starts tomorrow night (Sunday at 10 p.m. on Showtime). I am off to relax and read.  I will return tomorrow to review Whispers Beyond the Veil by Jessica Estevao.  Take care and Happy Reading!