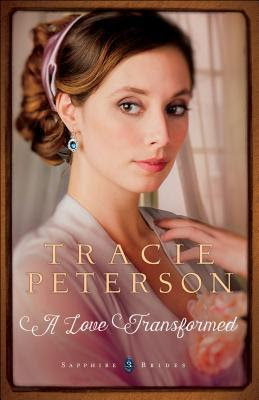 It is the last day of September.  Only three months left in 2016! Do you prepare ahead for Christmas or do you wait until after Thanksgiving to shop?  I have a gift trunk that I slowly fill up during the year.  I especially look for stocking stuff items.  To put you in the mood for Christmas, Debbie Macomber's Twelve Days of Christmas will be out on October 4.

A Love Transformed by Tracie Peterson is the third book in the Sapphire Brides series.  Clara Vesper lives with her husband, Adolph is New York City in April of 1917.  Clara’s was an arranged marriage by her mother.  Adolph and Clara have been married twelve years when she receives word that he was murdered in an alley.  She is told very dispassionately by her husband’s secretary, Jack Brindleson.  Otto Vesper, Adolph’s twin brother, comes around and tells Clara that Adolph was in serious debt.  That the home and its furnishing are all owned by Otto.  He assures her that he will continue to take care of her (I’m sure he has a plan).  Otto and Adolph owned a jewelry company.  Adolph was known as the person who designed their beautiful jewelry that utilizes Yogo sapphires from Montana.  Clara is the actual designer.  Clara is worried that once her mother finds out she is a widow, she will swoop in and arrange another loveless marriage (she’s right).  Clara begins making plans for herself and her children (twins:  Hunter and Maddy).  Clara wishes to return to Montana to her Aunt Madeline and Uncle Paul.  She is also hoping to reconnect with Curtis Billingham, her one true love.  But will Otto and her mother let her get away that easily.  Otto needs Clara for her design talent and he may not have been completely truthful with her about a few matters.  Clara’s mother has her own motives.  Will Clara be able to find happiness in Montana?

A Love Transformed is an easy novel to read, but it is extremely predictable.  It is easy to predict how the story will play out once we are introduced to the characters.  The book contains good writing, but I just wanted more.  This novel can be read without having enjoyed the previous books in the series.  I found Clara to be extremely naïve.  She took what she was told at face value.  Considering her age and position in society, she should have been a little savvier (at least double check what she was told by Otto).  I also thought that since fourteen years have passed since she last saw Curtis, her love would not be as deep or emotional.  First love is sweet, but usually not lasting.  Overall, A Love Transformed is a sweet book, but not my favorite in the series.  I give A Love Transformed 3.5 out of 5 stars (it was okay).  This will not stop me from enjoying books by Tracie Peterson in the future.

The first two books in Sapphire Brides series are A Treasure Concealed and A Beauty Refined.  Tracie Peterson's next book is My Valentine.  It will be out on January 1, 2017.  You can follow Tracie Peterson on Amazon.  I received a complimentary copy of the novel in exchange for an honest review.  The comments and opinions expressed are strictly my own.

I have to go feed the children (the cats and dogs).  They are starting to get very vocal.  I hope all of you have a delightful evening.  If you go out, stay safe.  I am reading Ghost Times Two by Carolyn Hart tonight.  I will return tomorrow to review another book!  It's a guarantee.  Take care and Happy Reading!

Posted by Kris Anderson, The Avid Reader at 5:20 PM