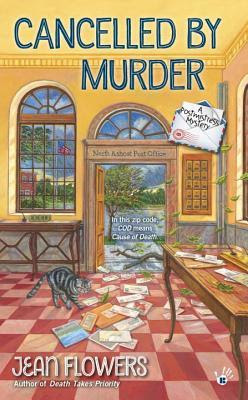 Good morning!  Jean Flowers is the author of A Postmistress Mystery (the book I am highlighting today).  Did you know that Jean Flowers is a pseudonym.  Jean Flowers real name is Camille Minichino.  She also writes under the names of Margaret Grace and Ada Madison.  Camille Minichino wrote one of the first cozy mystery series that I read and enjoyed. It was the Periodic Table Mystery series.  I was looking through my local library for something new and found the mystery section.  I then found Ms. Minichino's book and proceeded to locate every book in the series.  I then hit my local bookstore and discovered Laura Child's tea shop mysteries and Monica Ferris' A Needlecraft Mystery series (with Betsy Devonshire).  I have been enjoying cozy mysteries ever since!

Cancelled by Murder by Jean Flowers is the second book in A Postmistress Mystery series.  Cassie Miller has been back in her hometown for about a year, and she is enjoying being the local postmaster.  A hurricane is heading towards North Ashcot, Massachusetts, and Cassie decides to close up the post office early (as is the rest of the town).  On her way home, Cassie notices that Daisy Harmon of Daisy’s Fabrics is just closing up.  After Cassie is settled at home, she hears a siren and then an ambulance whisks by her home and later two police cars.  Soon there is a report on the news of the first casualty of the storm (hurricane storm).  When Cassie receives a call from Sunni Smargan, her best friend and chief of police, she finds out that the victim is Daisy.  She was found dead under a big tree limb.  But the limb was not the cause of Daisy’s death.  Someone was trying to blame the storm on Daisy’s death.  Daisy had been the driving force behind the opposition to the farmer’s market proposal (because it closed off all traffic to the main street of shops).  Daisy had also added cards to her shop which angered card shop owner, Liv Patterson.  Cassie was not going to get involved in the investigation, but Cliff Harmon, Daisy’s husband, request her help.  He wants to find out what happened to his wife.  Cassie knows that Sunni will tell her to not get involved (and threaten to arrest her), but Cassie agrees to look into Daisy’s death.  Cassie is privy to all the local gossip working at the post office and this aids her mission.  But someone does not like Cassie delving into Daisy’s affairs.  Let’s hope Cassie does not end up getting cancelled!

Cancelled by Murder is well-written and entertaining.  I like the characters and Cassie’s job as postmistress (unique for cozy mysteries).  The story actually ends up with two mysteries (sorry, spoilers).  The author tried to make the mysteries complicated, but I thought it was fairly simple to pick out the culprits (I write down my guess on paper and then read the book and wait to see if I am right).  North Ashcot is your typical small-town with everyone knows everyone else’s business.  There seemed to be a lot of attention on Cassie’s everyday life in the beginning of the book (reading, watching television, meeting friends, lack of food in her fridge, etc.) that slowed down the pace of the book.  I was glad when the pace picked up (as we delved more into the investigation).  Cancelled by Murder can be read alone.  Events from the first book in A Postmistress Mystery series are mentioned in Cancelled by Murder.  I liked the postal information included at the end of the book along with the postal humor.  I give Cancelled by Murder 4 out of 5 stars (I liked it).  I look forward to reading the next book in A Postmistress Mystery series when it is published.

The first book in A Postmistress Mystery series is Death Takes a Priority. I received a complimentary copy of the novel in exchange for an honest review.  The comments and opinions expressed are strictly my own.

I hope you found my review helpful.  I sincerely hope that all of you have a delightful Friday.  I will be back soon with another book review (it's a given). Take care and Happy Reading!


Posted by Kris Anderson, The Avid Reader at 9:00 AM