Whispers Beyond the Veil 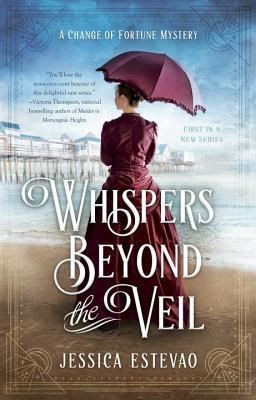 Happy Sunday!  I hope all of you are having an enjoyable (and relaxing) day! My youngest cat, Lil' Dickens is living up to his name.  Every single time I open up the back door (sliding door) to go outside, he darts out. He then starts attacking leaves and limbs. He even tries to "hide" (in plain sight usually behind a tiny limb or in the grass), so I will go and find him.  He definitely makes me laugh and smile (though he drives my mother nuts).  We all need laughter in our lives.

Whispers Beyond the Veil by Jessica Estevao is the first book in A Change of Fortune Mystery series.  It is 1898 (in Canada) and Ruby Proulx has not had an easy life growing up with her father.  Her father hawks useless medicines and medical devices while Ruby earns a little extra money telling fortunes with her cards.  They live in tents and are always on the go.  They have never been able to save much money, because her father is always spending their money on new get rich quick schemes (that never work).  His latest waste of money is a medical device that will invigorate and re-energize a person.  Ruby wants nothing to do with it, but her father can be very insistent.  He hooks up Ruby’s friend, Johnny, to the machine and has Ruby turn it on.  The voice warns her not to do it, but she flips the switch anyway.  Johnny ends up dead and Ruby’s father blames it all on her (of course).  He states they must separate and tells her to leave immediately.  Ruby takes what little money she has saved up telling fortunes, and heads for Old Orchard, Maine.  Ruby is heading for Honoria Belden, her mother’s sister (her mother passed away after giving birth to Ruby).  Ruby arrives in town and is immediately accosted by a purse snatcher on the pier.  Ruby is rescued by Officer Warren Yancy.  He escorts her to her aunt at The Hotel Belden owned by her Aunt Honoria.  Her aunt is thrilled to see her.  Honoria has just revamped the hotel, and will be re-opening it as a hotel for Spiritualist (a big movement in the US at the time).  The featured star will be the medium, Miss Flora Roberts.  But when Miss Flora cancels, Ruby feels she must step in and help her aunt.  Without the medium, the guests will cancel and her aunt will lose the hotel (she took out a mortgage for the remodel).  It turns out that each female in Ruby’s maternal family has a unique gift.  Ruby has been hearing the voice for years, but she was afraid to tell anyone (did not want to be put in an asylum).   Will Ruby be a convincing medium?  Ruby gets worried, though, when Leander Stickney checks into the hotel.  He is the president of the Northeastern Society for Psychical Research.  Instead of promoting psychic phenomena, Mr. Stickney is out to debunk it.  But then Mr. Stickney turns up dead, and this presents a new problem for Ruby—the police!  Ruby needs to find the killer and save the Hotel Belden (before it gets in the press).  Join Ruby in Whispers Beyond the Veil.

There is quite a bit going on in this book.  I have tried to summarize the main portions of the book.  I thoroughly enjoyed Whispers Beyond the Veil.  We are given a lot of background information in the book on Ruby, the hotel, Old Orchard, etc.  It can a little confusing (especially coming at you so quickly at the beginning), but we need all this detail.   The story is well-written and engaging with entertaining characters (especially Honoria Belden). You will find that not everything is solved in this first book.  We will have to see how things play out during the course of the series.   The mystery was complex and had a neat twist that I do not believe many people will expect.  I give Whispers Beyond the Veil 4.5 out of 5 stars (I more than liked it, but I was able to solve the mystery and expected the twist).  I love solving the mysteries! If you enjoy unique, historical mysteries, I believe you will enjoy Whispers Beyond the Veil.  I look forward to reading the next book in A Change of Fortune Mystery series.

You can follow Jessica Estevao on Facebook.  This is her debut novel! I received a complimentary copy of the novel in exchange for an honest evaluation.  The comments and opinions expressed are strictly my own.


Posted by Kris Anderson, The Avid Reader at 7:24 PM