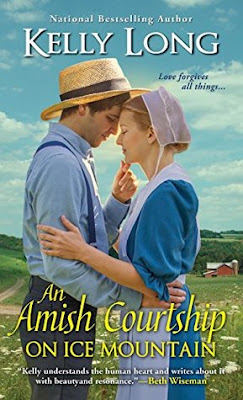 Welcome!  Can you believe November is almost over?  2017 will be over before we know it.  The Liverpool Girls by Pam Howes will be published on November 30. It is the final book in The Mersey Trilogy.

An Amish Courtship on Ice Mountain by Kelly Long is the fourth book in The Amish of Ice Mountain series.  It is 1958 in Ice Mountain, Pennsylvania and Joel Umble is twenty years old.  Joel lives with his anxiety ridden mother and his cruel older brother, Judah.  Late one night, Joel is unable to sleep and goes to the creek.  He stumbles upon Martha Yoder bathing.  Joel is instantly attracted to her and wants to court the young woman.  Martha does not feel worthy of Joel’s attentions.  She comes from a poor family, uneducated and takes care of her grandmother and parents.  Martha also has the added problem of Judah and his unwanted attentions.  Judah has made it clear that he wants Martha and what he intends to do to her.  Martha is unprepared for Joel’s determination (and love) or Judah’s cruelty.  Will there be a happily ever after for Joel and Martha?
It was lovely to get Joel Umble’s story in An Amish Courtship on Ice Mountain.  The story is nicely written and has a good pace which made for an easy to read story.  I was unprepared for the violence in this book (it was realistic and cruel).  It is uncharacteristic for an Amish novel.  The romance is simple, straightforward and predictable.  It is gratifying to find out what and who shaped Joel Umble into the man he became (the spiritual leader of their community).  He does come across as a goody two-shoes though (honorable, decent, kind, hardworking, does the right thing).  Joel is good and kind in the face of evil and adversity.  I liked the addition of Sebastian to the story and how he affected Joel’s life.  Fans of the The Amish of Ice Mountain series will delight in reading An Amish Courtship on Ice Mountain.  There is a preview of An Amish Match on Ice Mountain at the end of book which is Stephen Lambert’s story (Joel’s best friend).

Thank you for stopping by and reading my review.  I will be featuring Death Comes to the School by Catherine Lloyd next time.  It is the fifth book in A Kurland St. Mary Mystery series (historical cozy mystery).  May you have a remarkable day.  Take care and Happy Reading!


Posted by Kris Anderson, The Avid Reader at 9:30 AM