Out of the Ordinary: Apart from the Crowd series 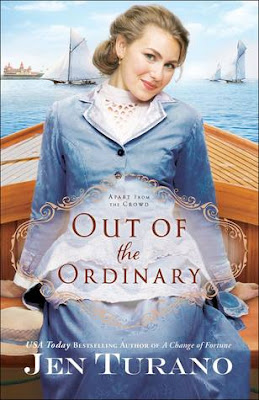 Thank you for visiting today and reading my latest book review.  Mermaid Fins, Winds and Rolling Pins by Erin Johnson will be published on November 21.  It is the third book in Spells and Caramels series.  Imogen is off on another magical adventure when she is sent to bake for the Mermaid Kingdom.

Out of the Ordinary by Jen Turano is the second book in Apart from the Crowd series.  Miss Gertrude Cadwalader is companion to Mrs. Davenport which is not an easy task.  Mrs. Davenport is known for helping herself to other people’s belongings while they are at parties and events (which Gertrude returns).  Gertrude and Mrs. Davenport are attending the engagement party of Permilia Griswold and Asher Rutherford on the yacht of Harrison Sinclair.  The next day Mrs. Davenport confesses that she left her reticule on board the yacht with stolen contraband inside.  Gertrude tries rescue it, but is caught by Harrison’s mother before she can depart.  Gertrude is arrested and accused of stealing from the Manhattan Beach Hotel as well.  Harrison works with Gertrude to clear her name (and Mrs. Davenport’s) and find the true culprit (and true love along the way).

Out of the Ordinary is easy to read and nicely written.  Out of the Ordinary can be read alone.  If you enjoy humorous historical novels, then I suggest picking up a copy of Behind the Scenes (first book in Apart from the Crowd series).   There is one laugh out loud moment after another in Out of the Ordinary.  I was happy to see growth in Mrs. Davenport and Gertrude by the end of the novel.  At times I wanted to shake Gertrude and tell her to develop a backbone (especially after she wore the birdcage for a bustle).  I felt that Ms. Turano captured the era with the fashions, dialogue and mannerisms.   There is some predictability to the romance portion of the story (that seems inevitable in romance novels) and I felt the first night (night of engagement party) went on too long.  That night alone took up 48% of the book.  The mystery was interesting and I enjoyed figuring out the culprit.  Out of the Ordinary is a quirky novel that will appeal to readers of historical romance novels and fans of Jen Turano.  The next book in Apart from the Crowd series is Caught by Surprise.  It is scheduled to be released on July 31, 2018.  It will tell the story of Miss Temperance Flowerdew and Mr. Gilbert Cavendish.

I will return tomorrow with my thoughts on Stay Calm and Collie On by Lane Stone.  May each of you have an enticing day.  Take care and Happy Reading!