Dangling by a Thread by Lea Wait 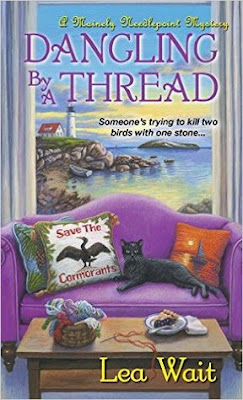 I hope all of you had a good day.  I spent the day doing some work around the house.  We have so much work to do on our home (home ownership is not for the weak).  I am currently clearing out my studio (I am selling it off).  I should be done by 2018 at my current pace!


Dangling by a Thread by Lea Wait is the fourth book in A Mainely Needlepoint Mystery series.  Angie Curtis has been back in Haven Harbor, Maine for three months.  She is the manager of her grandmother’s business, Mainely Needlepoint.  Angie is out early one morning, and she notices a stranger docking a skiff.  Angie has not seen this man before and follows him as he goes about his duties (does anyone else find this odd).  After some inquiries, Angie finds out that he is called The Solitary.  He lives on King’s Island and only comes to Haven Harbor every couple of months for supplies.  His real name is Jesse Lockhart, an Iraq veteran who was injured in Afghanistan.  Jesse is friends with Mainely Needlepointer, Dave Percy (met in rehab).  Jesse needs the quiet of the island, and he feels he is protecting the Great Cormorants that nest on King’s Island.  The Great Cormorants are a threatened species (just before extinct).  They need a certain type of environment to thrive, and King’s Island is perfect for them.  A big yacht has docked in Haven Harbor.  It belongs to Gerry and June Bentley.  They have decided that King’s Island is perfect for a vacation home.  Jesse does not wish to sell the island.  Unfortunately, he jointly owns the island with his cousin, Simon.  Gerry Bentley flies in Simon to woo him into selling.  They want to have Jesse declared incompetent so Simon can sell the island to Gerry.  When the hear what Gerry and Simon are up to, they head out to King’s Island to warn Jesse.  Jesse is on high alert and shoots an arrow at Dave (into his leg).  The police go out the next day with Angie and find Jesse dead.  Jesse did not deserve to die in this manner.  He was a quiet man who was just trying to protect some birds.  Angie is determined to find Jesse’s killer.  Dave, Angie and friends are also working to protect the island from being developed.  Will they succeed in their endeavors?

Dangling by a Thread can be read alone.  Lea Wait updates the readers on what happened in the previous novels.  I must admit that this was not my favorite book in the series.  I thought too many pages were devoted to Angie’s thinking and contemplating about life, living alone, the antics of her new kitten, and Patrick West (the man she would like to date).  I thought the concept for Dangling by a Thread was a bit weak.   Angie had just met Jesse, but she dives in to save his island and solve his murder.  A majority of the book is devoted to friendship, family, and Angie’s interest in Patrick West.  I give Dangling by a Thread 3 out of 5 stars (I am being a little generous).  The murderer was obvious.  One little statement gives away the identity of the killer.  Some information is repeated a few times (and it was not necessary).  I really got tired of hearing about Dave’s poison garden (and it was not used in the murder).  The chapters are very short and choppy (it was annoying).  I hope the next book in A Mainely Needlepoint Mystery series is better.  It is Tightening the Threads and will be out in March 2017.

May all of you have a relaxing evening.  We need to get in all the rest we can before the busy holiday season is upon us.  I am reading Search for the Dead by Sheila Connolly (I had to finish another book last night before I could start this one).  See you tomorrow. Take care and Happy Reading!