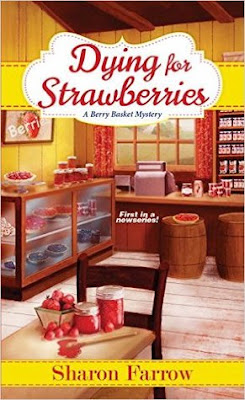 Happy Book Release Day!  The new books are Dangling by a Thread by Lea Wait; Duty to the Crown by Aimie Runyan; Saddle Up For Murder by Leigh Hearon; Christmas Angels by Viola Shipman; Pocketbooks and Pistols by Dorothy Howell; Eggnog Murder by Barbara Ross, Leslie Meier, and Lee Hollis; A Christmas Tartan by Paige Shelton; Feliz Navidead by Ann Myers; and Get Witch or Die Trying by Tonya Kappes. Another book released today is Dying for Strawberries by Sharon Farrow which I am reviewing today!

Dying for Strawberries by Sharon Farrow is the first book in A Berry Basket Mystery.  Marlee Jacobs owns the Berry Basket in Oriole Point, Michigan.  Marlee opened the store where she sells berries and berry related items two years ago after leaving New York (a murder ended her career at the Gourmet Living Network).  Marlee is getting ready for the Strawberry Moon Bash that will be held on Friday when her friend, Natasha Bowman comes into the store.  Natasha is married to Cole Bowman who physically abuses his wife (but she refuses to leave him).  Later that day, Natasha and Cole have a big fight.  Natasha has not been seen since then.    At a business meeting that evening, they find out that a lot known as strawberry fields has been sold to Taylor Investments.  Taylor Investments is owned by Cole Bowman.  If Cole’s plans go through, all the small businesses in town will be out of business.  Of course, it turns out that he owns many of those buildings as well including Marlee’s (which he is selling to outsiders).  The next night Marlee is waiting for Ryan, her fiancé, at the marina when someone comes up behind her and whacks her on the end.  They then push her into the water.  But no one believes her story (she had been drinking).  Marlee is worried about Natasha.  Marlee feels the police are not being proactive and sets out to get answers.  She starts asking questions (alienating her fellow shop owners).  Marlee then searches Cole and Natasha’s house for clues.  Instead she finds Cole dead on his doorstep.  Marlee has more questions than answers.  She is determined to find her friend as well as Cole’s killer.  Marlee is sure the attempt on her life is connected.  Will Marlee find the culprit or be another victim?

Dying for Strawberries is the first book in the series, but it did not feel like it.  It felt more like a book in the middle of a series.  The reader was missing information.  There is also way too much going on in this book.  It was one thing after another.  Marlee has to deal with her store, her fiancé, Natasha is missing, Cole’s murder, the development of strawberry fields, the future of her shop since Cole is determined to sell the building (he does not like Marlee), Marlee’s attempted murder, the secrets of the zoning commissioners, and Marlee’s nemesis from New York.  The book is easy to read and can be finished in about three hours (if you just sit and read).  I had a hard time liking Marlee especially after she began her questioning.  She was pushy, rude, and annoying (no one taught her the art of subtlety).  Marlee felt she was entitled to these people’s secrets since someone whacked her on the head (maybe the head whack caused some damage).  I did enjoy the mystery.  It was the best part of the book.  I give Dying for Strawberries 3 out of 5 stars (the good mystery raised the score).   I am not sure if I will read the next book in A Berry Basket Mystery series.  Knowing me, I will probably give the series one more chance.

Thank you so much for visiting and reading my book review.  May all of you have a lovely evening.  I will return tomorrow to share another book with you.  Take care and Happy Reading!