Death and a Pot of Chowder: A Maine Murder Mystery 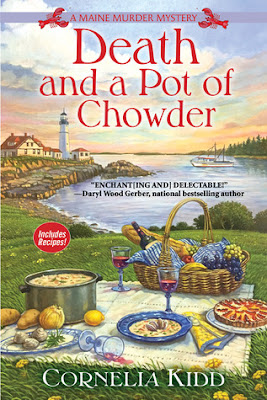 Welcome!  Airships, Crypts and Chocolate Chips by Erin Johnson is out today.  It is the sixth novel in the Spells & Caramels series staring Imogen and Iggy.

Death and a Pot of Chowder by Cornelia Kidd (aka Lea Wait) is the first A Maine Murder Mystery.  Anna Winslow lives on Quarry Island in Maine with her husband, Burt and son, Jake.  She is surprised when she receives a letter from Isabel “Izzie” Jordan stating that she is her half-sister and would like to meet.  A couple of weeks later, Anna is in Portland to meet up with Izzie.  They arrive at their lunch destination when Anna gets a call from Burt regarding his brother, Carl.  Carl’s boat was found adrift and he is missing.  Anna and Izzie rush to Quarry Island where the search is ongoing.  Later that night, Carl’s body is discovered, but he did not die from drowning.  Detective Jonas Preston of the Maine State Police is on the case and they soon learn that the evidence is mounting against Burt.  Anna and Izzie band together to track down Carl’s killer.

Death and a Pot of Chowder is set on Quarry Island, Maine. The author provided detailed descriptions of the island and its history.  Anna is thirty-two and has been married to Burt since she was eighteen years old.  Burt is a fourth-generation lobsterman and expects his son to follow in his footsteps.  Anna grew up on the same street.  Her mother and grandmother still live in the house (close knit family).  It is a place where people can leave their doors unlocked and children can roam freely (until someone murdered Carl).  The author did a terrific job at setting the stage for A Maine Murder Mystery series.  I like how the author brought the two sisters together and their plans for the future.  I loved how Anne of Green Gables was woven into the story (one of my favorite books).  I thought the mystery was simple.  I easily identified the guilty party.  Anna and Izzie work together to figure out Carl’s movement before he was killed.  They question various people and get assistance from retired detective and neighbor, Rob Erickson.  I could have done with less speculation and repetition.  There needed to be more action which would have helped the pacing (which was slow at times).  My rating for Death and a Pot of Chowder is 3.5 out of 5 stars.  I found Jake to be extremely annoying.  I realize his attitude and behavior are realistic for a fourteen-year-old, but I did get tired of his yelling and door slamming.  Izzie’s love of cooking comes through as she describes how she likes to create dishes and execute them.  There are various cookbooks mentioned and there are recipes included at the end of the book.  There are many engaging cozy moments as the two sisters bond, explore the island, cook, and plan for the future.  Death and a Pot of Chowder is nicely written, has good characters, rustic setting and plenty of food.  Death and a Pot of Chowder captured my interest and I will be picking up the next A Maine Murder Mystery.

Cornelia Kidd aka Lea Wait is the author A Mainely Needlepoint Mystery series and An Antique Print Mystery series. I appreciate you stopping by today.  I hope you are having a relaxing Saturday.  I will return on Sunday with my review of A Daring Venture by Elizabeth Camden. The second book in An Empire State Novel series.  Take care and Happy Reading! 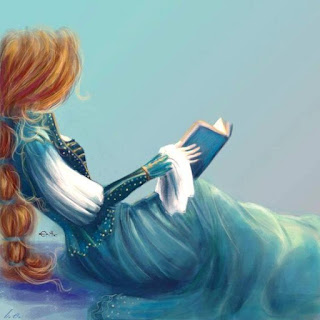