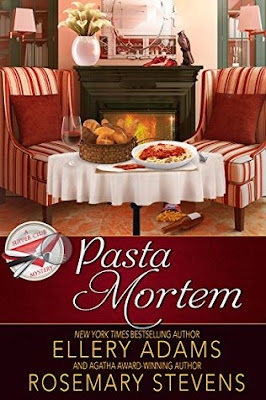 Felicitations!  Arms of Mercy by Ruth Reid, Bought the Farm by Peg Cochran, A Daring Venture by Elizabeth Camden, The Hawaiian Discovery by Wanda E. Brunstetter and Jean Brunstetter, and Rockets' Dead Glare by Lynn Cahoon are out today.

Pasta Mortem by Ellery Adams and Rosemary Stevens is the seventh tale in A Supper Club Mystery series.  James Henry and his wife, Jane are awaiting the birth of their second child.  The Supper Club has decided to start a new Mediterranean diet, but thanks to Murphy Alistair the group gets off to a poor start.  They believed she was taking their picture for the Shenandoah Star Ledger.  Unfortunately, she used their photos in Southern Style magazine to advertise her upcoming book and Quincy’s Gap as one of five undiscovered small towns in America (there goes their small town).  Murphy has teamed up with real estate developer, Ray Edwards to build condos, apartments and shops on a local farm.  In nearby Cardinal’s Rest is the twenty-fifth reunion of the cast of Hearth and Home.  The Supper Club members are attending a special VIP event at Red Bird B&B.  Murphy is on the arm of Ray Edwards and the two have overindulged in the liquid refreshment.  The next day, James hears that Edwards is dead and Murphy is accused of the crime.  Despite the groups dislike of Murphy, they know she is not a killer.  When a second person turns up dead at the Red Bird B&B with Murphy present once again, James knows they need to narrow down their suspect list.  If they do not identify the killer soon, Murphy will end up wearing an orange jumpsuit for the rest of her life.

Pasta Mortem is an enjoyable cozy mystery.  It is nice to visit Quincy’s Gap and catch up with James Henry and the rest of The Supper Club.  I like how the members of the group continue to develop.  In each book we learn a little more about a different character.  I like to see them change (personal growth which helps enrich their lives).  The mystery was compelling.  It had some unexpected developments that will surprise readers.  However, with the aid of a few pointed clues, I was able to peg the killer before I was halfway through the novel.   I thought Pasta Mortem was well-written and it had a steady pace.  While it can be read alone, you will miss out on the characters back stories.  I do recommend reading the books in order or at least reading Carbs & Cadavers first (that way you get the basics).  There are many delightful cozy moments in Pasta Mortem that will having you smiling and chuckling.  In Pasta Mortem the group is learning new recipes, going to events for Hearth and Home reunion, preparing for Valentine’s Day, Jane is expecting and having difficulties, Eliot is loving school, Lucy is having relationship issues, Luis’ mama has yet to leave town, and so much more.  I am giving Pasta Mortem 4 out of 5 stars.  I was left with unanswered questions at the end of the book.  While the murder was wrapped up neatly, another issue was left unresolved.  I just love the name James and Jane picked for their new baby.  I hope we get to revisit Quincy’s Gap again soon in another A Supper Club Mystery.

I appreciate you taking the time to read my review.  I will be featuring Arms of Mercy by Ruth Reid.  May you have a day filled with wonder.  Take care of yourself and Happy Reading! 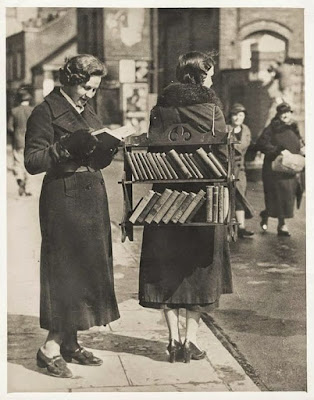