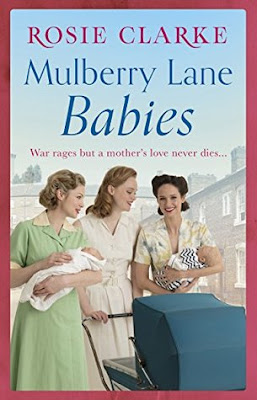 Happy Father's Day! Rosie Clarke is the author of The Mulberry Lane Series, Emma Trilogy, The Workshop Girls series, The Downstairs Maid, Jessie's Promise, and The Runaway Wife.  You can follow Ms. Clarke on Amazon, Facebook, Twitter and Goodreads.  Rosie Clarke is married and lives in East Anglia.  When she is not writing, Rosie likes to read, watch good films, and enjoy holidays in sunny locales.

Mulberry Lane Babies is well-written and has steady pacing.  I like the authors conversational writing style.  I was immediately drawn into the story and it held my attention throughout.  I do recommend reading the series in order.  Each book in The Mulberry Lane Series builds upon the previous one.  Rosie Clarke has crafted lovely characters for her series.  They are realistic and well-rounded.  There are characters to love and there are characters that you will dislike (intensely).  My favorite characters are Peggy, Maureen, Janet, Tommy and Anne.  They are warm, friendly, thoughtful people and I wish they were my neighbors.  Peggy is the mother figure and confidant for the residents of the lane.  I like that we get to know Anne more in Mulberry Lane Babies. Tommy continues to grow into a responsible, hardworking and caring man.  The East End was brought alive for me with the descriptions of the shops, home and area.  We are given a realistic picture of life for those at home during World War II.  Rationing is increasing and items are in scarce supply which we see in this book.  While America is just entering the war, England has been at war since 1938.  The author did an admirable job at handling some difficult subject matter (a woman being attacked).  The residents of Mulberry Lane have each other to rely on during these dark days.  The characters feeling/emotions come through the pages along with the grittiness of the war (one part of the story will have you in tears).  I like how the author balances the difficulties with the joy.  There may be a war going on, but they have their friendship, their families, weddings, and new babies. The Mulberry Lane Series would make a wonderful television program on PBS.  The Avid Reader rating for Mulberry Lane Babies is 5 out of 5 stars.  I cannot wait for my next to journey to Mulberry Lane. Mulberry Lane Babies can be purchases on Amazon, Barnes and Noble, Kobo, iBooks, and GooglePlay.

The other novels in The Mulberry Lane Series are The Girls of Mulberry Lane and A Wedding at Mulberry Lane (both books are a part of the Amazon Kindle Unlimited Program).  Thank you for stopping by today.  I hope you take the time to visit some of the other stops on the Mulberry Lane Babies Tour (see below).  I will be sharing my thoughts on The Warlock's Enchanted Kiss by Deanna Chase next time.  It is the second book in Witch Island Bride's series.  I hope you have a lovely day with the father figure in your life.  I am remembering my father with love today.  Take care and Happy Reading! 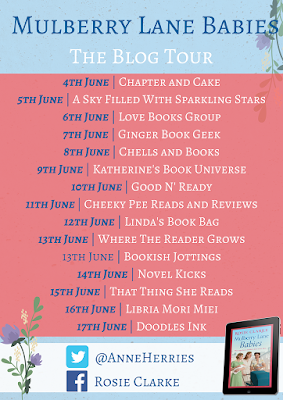