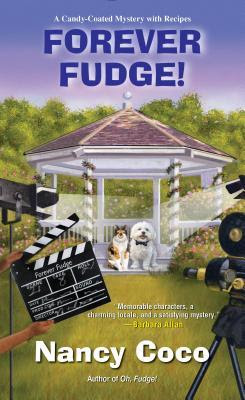 Good Day!  If you are looking to try basket weaving with Willow, then you should check out the book titled Willow by Jenny Crisp.  It has great illustrations and descriptive instructions for twenty easy to complete projects.  There are resources listed for obtaining materials as well.


Forever Fudge by Nancy Coco is the sixth book in A Candy-Coated Mystery series.  Allie McMurphy is the owner of the McMurphy Hotel and Fudge Shop on Mackinac Island.  Labor Day is behind them and so is tourist season.  It seems, though, that a film crew has invaded the island to film the pilot of a mystery show starring Dirk Benjamin. Dirk will be portraying a Rex Manning type character and will be shadowing him before production starts (lucky Rex).  Allie is out walking Mal, her bichon poo, when he sniffs out a dead body in the alley.  A note was left with the body with Allie’s name on it.  Inside the note is written “kf3” which sounds like a chess move according to Mr. Beechum. The killer is challenging Allie to a battle of the wits.  While Francis and her new hubby are on their honeymoon, Allie has extra responsibilities at the hotel.  In addition, she is dealing with her breakup from Trent who is not ready to give up on their relationship and Rex who asks her out on a date.  Out on another walk with Mal when he digs up a sock and a toe under a tree.  The culprit left another chess clue carved into the tree.  Who is behind the crimes and why are they singling out Allie?  Join Allie are her most challenging and personal case yet in Forever Fudge. 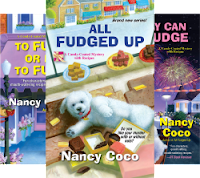 Forever Fudge contains well-developed and established characters as well as a beautiful location.  I enjoy learning more about Mackinac Island with its historic locations including the Grand Hotel which was used as a location in my favorite film Somewhere in Time.  I thought the pace was a little slower Forever Fudge as Allie deals with making fudge, the day-to-day running of the hotel, Jenn departing for Chicago, her romantic woes, a prankster and the whodunit.  I missed Frances and her wit in this tale.  Frances is off enjoying her honeymoon and does not return until the end.  The main mystery may seem complicated on the surface, but I thought it was straightforward.  I quickly pinpointed the culprit and then kept reading to see if I was correct.  There is a limited suspect list, but there are good clues and a red herring.  The secondary mysteries resolution comes out of left field and the motive was weak.  The chess clues did not resonate with me since I do not play the game (I lack the patience for the game).  I would have preferred Allie to actively investigate the crime instead of information being passed along to her.  I could have done with less romance.  Allie loves Trent, but he does not wish to live on Mackinac Island full time.  I am rooting for Rex who seems to have more in common with Allie.  However, his marital history stands in their way.  My rating for Forever Fudge is 3 out of 5 stars.  It is not my favorite book in A Candy-Coated Mystery series.  Forever Fudge can be a standalone novel.  Allie's history is included as well as the past cases from the other five books. There a luscious fudge recipes included in the book and a preview of Fudge Bites.


Thank you for joining me today. I will return tomorrow with my review of A Wells Landing Christmas by Amy Lillard.  I hope you enjoy a beguiling fall day.  Take care and Happy Reading! 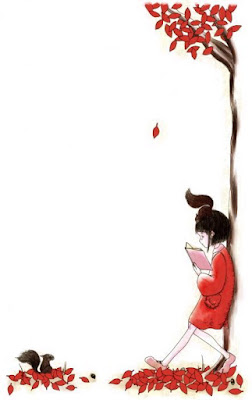