Mardi Gras Murder: A Cajun Country Mystery plus a Giveaway! 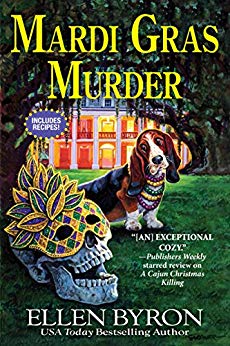 Southern charm meets the dark mystery of the bayou as a hundred-year flood, a malicious murder, and a most unusual Mardi Gras converge at the Crozat Plantation B&B.

It’s Mardi Gras season on the bayou, which means parades, pageantry, and gumbo galore. But when a flood upends life in the tiny town of Pelican, Louisiana—and deposits a body of a stranger behind the Crozat Plantation B&B—the celebration takes a decidedly dark turn. The citizens of Pelican are ready to Laissez les bon temps rouler—but there’s beaucoup bad blood on hand this Mardi Gras.

Maggie Crozat is determined to give the stranger a name and find out why he was murdered. The post-flood recovery has delayed the opening of a controversial exhibit about the little-known Louisiana Orphan Train. And when a judge for the Miss Pelican Mardi Gras Gumbo Queen pageant is shot, Maggie’s convinced the murder is connected to the body on the bayou. Does someone covet the pageant queen crown enough to kill for it? Could the deaths be related to the Orphan Train, which delivered its last charges to Louisiana in 1929? The leads are thin on this Fat Tuesday—and until the killer is unmasked, no one in Pelican is safe.

Ellen Byron authors the Cajun Country Mystery series. A Cajun Christmas Killing and Body on the Bayou both won the Lefty Award for Best Humorous Mystery and were nominated for Agatha awards in the category of Best Contemporary Novel. Plantation Shudders was nominated for Agatha, Lefty, and Daphne awards. Mardi Gras Murder launches October 9th. Ellen’s TV credits include Wings, Just Shoot Me, and Fairly OddParents. She’s written over 200 national magazine articles, and her published plays include the award-winning Graceland. She also worked as a cater-waiter for the legendary Martha Stewart, a credit she never tires of sharing.

8 tsp. butter
1 bunch scallions, chopped
½ cup finely chopped parsley
2 celery ribs, chopped
3 tsp. flour
1 cup oyster liquid
1 quart milk
3 dozen oysters, cut in thirds (you can buy them in jars at the grocery store and use the liquid for the recipe)
Salt and pepper to taste

Mardi Gras Murder by Ellen Byron is the fourth book in A Cajun Country Mystery series.  The town of Pelican, Louisiana suffered from heavy rains and flooding.  Behind the Crozat Plantation B&B, under piles of debris the family finds a dead man without identification.  Three weeks later, the town is recovering from the flooding and they are ready for the Mardi Gras celebrations to begin—Laissez les bon temps rouler.  The celebrations include a gumbo cook-off, a parade and the Miss Pelican Mardi Gras Gumbo Queen pageant.  Maggie’s grandmother normally is one of the pageant judges, but walking pneumonia has her confined to bed which means Maggie must step up to the plate (despite her opinion of pageants).  At the first meeting of the judges, Maggie learns about the controversial Louisiana Orphan Train exhibit.  The highlight of the meeting is when a fight breaks out between two of the pageant contestant mothers.  On the way home, Maggie is rear ended by Gerard Damboise, head judge and president of the historical society.  Maggie finds him bleeding from a gunshot wound.  Gerard whispers two last words before he perishes.  Maggie wonders if his death is related to the pageant or the orphan train exhibit.  Maggie begins scouting for clues in the hopes of resolving Gerard’s murder. Can Maggie unmask the killer before Fat Tuesday?

Mardi Gras Murder can be read alone if you have not read the other novels in A Cajun Country Mystery series.  There is a lot going on in Mardi Gras Murder.  I only covered the basics in my summary.  There is the unidentified dead man, Mardi Gras, the pageant, problems with Tug’s gumbo pot, Gran’s illness, guests at the B&B, Maggie’s relationship with Bo, a mystery at Doucet, a secret room at Grove Hall, the flooding, and the orphan train exhibit controversy.  The book is well-written with a steady pace and humor scattered throughout.   There are numerous characters, but the author does provide a handy cheat sheet at the beginning of the book (I wish I could have printed it out).  Pelican is a small town where everyone knows your business and is happy to pass it along to others.  The town goes all out for Mardi Gras.  I learned some interesting facts about the holiday along with interesting traditions.  The murder mystery has some intriguing points (I do not want to spoil it for you).  There is misdirection along with direct clues.  Avid cozy mystery readers will have no problem solving the whodunit.  All the storylines are wrapped up at the end.  There is a sweet ending that will have the romantics smiling, and I love who won the gumbo cook-off.  Ellen Byron combines Southern charm, Mardi Gras, humor, a cast of quirky characters and a beguiling mystery into one rousing cozy mystery. 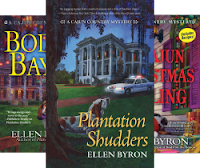 Mardi Gras Murder can be purchased at Amazon, B&N, Crooked Lane, BookBub, and Kobo.  The other novels in A Cajun Country Mystery series are Plantation Shudders, Body in the Bayou and A Cajun Christmas Killing.  The author is hosting a giveaway in honor of the tour.  You can enter here or use the Rafflecopter form below.  Please take the time to visit the other stops on the tour for guests posts, author interviews, spotlights, and character guest posts (see schedule below).  I will see you tomorrow when I return with another book review.  Have a lovely day and Happy Reading!

October 21 - The Power of Words – REVIEW

October 23 – I'm All About Books – SPOTLIGHT

October 25 – Escape With Dollycas Into A Good Book – REVIEW