A Tale of Two Hearts: Once Upon a Dickens Christmas plus a Giveaway!

A Tale of Two Cities
By Michelle Griep 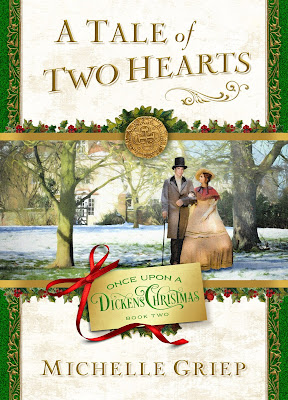 Innkeeper’s daughter Mina Scott will do anything to escape the drudgery of her life. She saves every penny to attend a finishing school, dreaming of the day she’ll become a real lady—and catch the eye of William Barlow, a frequent guest at the inn.
William is a gentleman’s son, a charming rogue but penniless. However, his bachelor uncle will soon name an heir—either him or his puritanical cousin. In an effort to secure the inheritance, William gives his uncle the impression he’s married, which works until he’s invited to bring his wife for a visit.
William asks Mina to be his pretend bride, only until his uncle names an heir on Christmas Day. Mina is flattered and frustrated by the offer, for she wants a true relationship with William. Yet, she agrees. . .then wishes she hadn’t as she comes to love the old man. And when the truth is finally discovered, more than just money is lost.  Can two hearts survive such a deception?
Click here to purchase your copy! 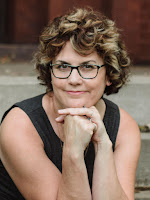 Michelle Griep’s been writing since she first discovered blank wall space and Crayolas. She is the author of historical romances: The Captured Bride, The Innkeeper’s Daughter, 12 Days at Bleakly Manor, The Captive Heart, Brentwood’s Ward, A Heart Deceived, and Gallimore, but also leaped the historical fence into the realm of contemporary with the zany romantic mystery Out of the Frying Pan. If you’d like to keep up with her escapades, find her at www.michellegriep.com or stalk her on Facebook, Twitter, or Pinterest.


Victorian Christmas Foods
So, it’s September, and you know what that means? It’s back to school. Pumpkin spiced everything is just around the corner. And it’s nearly time for cardigans and colored leaves. But besides all these autumn staples, it’s also time to start thinking about Christmas, because it will be here before you know it. How about this year you plan ahead to serve some traditional Victorian food?
In my newest release, A Tale of Two Hearts, the heroine’s father is known for his annual oyster stew that he serves on Christmas Eve. Here’s a bit of the background on that tasty soup.
Victorian Oyster Stew

Oysters have been savored in Britain since the days of the Romans. By Victorian times, industrialization cheapened oysters to the point of them becoming a staple of the poor man’s diet and were a frequent fare served in public houses. This, however, depleted their abundance, and by the mid 1800’s, the natural oyster beds became exhausted, making it harder to find good oysters. While other foods were served as well on Christmas Eve, oyster stew was as common as goose or turkey.
Another Victorian favorite that goes great on a crisp evening is good ol’ hot chocolate, though in Dickens’ England, it would’ve been called something else.
Drinking Chocolate

What we now call cocoa or hot chocolate was called drinking chocolate in the mid 1800s. This beverage was a favorite among Victorian ladies. You can find recipes for it even from the Regency era (early 1800s) and here is one for you to make at home.
And last, but not least, who hasn’t heard of Christmas pudding? To our American ears, that sounds like a tasty dish that you’d eat with a spoon and slap a little whipped cream on top. Actually, it’s more like a fruit cake.
Christmas Pudding

Christmas pudding is quite a production, one that begins well before Christmas Day. In fact, it begins on Stir-Up Sunday, the last Sunday before Advent (which is five weeks before Christmas). This is why when Mina, the heroine in A Tale of Two Hearts, returns home from dinner at Uncle Barlow’s, and though it’s not yet Christmas, she sees the pudding moulds on the kitchen table.
If these tastes and the accompanying smells still aren’t quite enough to get you in the Christmas spirit, then snatch yourself up a copy of the second book in the Once Upon a Dickens Christmas series. A Tale of Two Hearts is sure to get you in the mood.

A Tale of Two Hearts by Michelle Griep is the second installment in Once Upon a Dickens Christmas.  Mina Scott works at The Golden Egg Inn owned by her father, Jasper Scott in 1853 London.  Mina is engrossed in David Copperfield when her father finds her and sends her back to work.  He fails to understand her love of literature.  She enters the taproom and finds her crush William Barlow along with his friend Thomas Fitzroy.  William is a law clerk with a gentleman’s upbringing and an ailing mother with crippling medical bills.  His uncle, Charles Barlow is ready to name his heir.  It is between William and his conniving cousin, Percy.  When William learned his uncle would prefer to leave his estate to a married man, William may have given him the impression he had a bride.  Now Charles is hosting a tea for his heirs and their wives and William needs to find a woman willing to play the part.  When Mina appears, Williams asks if she will do him the favor of playing his wife for the tea.  Unfortunately, things do not go as planned and the deception will need to continue until Christmas.  Uncle Barlow is kind, gracious and a lover of literature just like Mina.  While she dislikes Percy and his equally odious wife, Mina does like deceiving the sweet man.  What happens when the truth is revealed?
I enjoyed reading the book to see how the tale would play out.  A Tale of Two Hearts is the second book in Once Upon a Dickens Christmas series, but it is a standalone.  Michelle Griep brought London in 1853 to life with her descriptions of the clothing, language, literature as well the architecture, cobbled streets, the inn and the insides of the buildings as well as the class stations of the characters.  I especially loved the imagery of Purcell’s where they had tea with Uncle Barlow.  A Tale of Two Hearts has delightful characters.  I especially liked Uncle Barlow and Miss Whymsy.  They are two charming people who have a touch of whimsy.  There are some good life lessons included in the story.  Second chances, forgiveness and Christian charity being the main themes.  Every one of us has needed a second chance at one time or another.  I thought A Tale of Two Hearts was well-written and had steady pacing which made for an engaging story.  The book is told from William and Mina’s point-of-views giving us different perspectives.  It is always fascinating to see how different men think from woman.  There are references to Charles Dickens work scattered throughout the story.  Uncle Barrow loves discussing literature with Mina and challenging her to guess the book title from a quote.  My rating for A Tale of Two Hearts is 4 out of 5 stars (I liked it).  I highly recommend reading the first book in Once Upon a Dickens Christmas series which is 12 Days at Bleakly Manor.  It has an intriguing mystery and a mysterious atmosphere.  A Tale of Two Hearts is the type of story that will leave you smiling and have you longing for Christmas.

To celebrate her tour, Michelle Griep is giving away a grand prize of a $25 Barnes & Noble gift card!  Be sure to comment on the blog stops (schedule below) for nine extra entries into the giveaway. Click here to enter and good luck!

Thank you for visiting today.  I will be featuring Murder on Millionaires' Row by Erin Lindsey tomorrow.  It is her debut mystery novel, and there will be a giveaway for one copy of the book (US and Canada only).  I hope you have a cheery day.  Take care and Happy Reading!