Drop Dead Ornaments by Lois Winston plus a Giveaway! 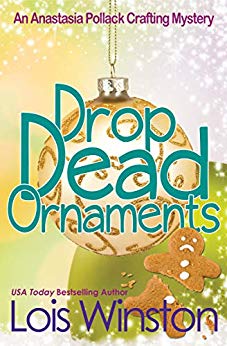 At the fair Anastasia meets Sophie’s father, Shane Lambert, who strikes her as a man with secrets. She also notices a woman eavesdropping on their conversation. Later that evening when the woman turns up dead, Sophie’s father is arrested for her murder.

Alex and Sophie beg Anastasia to find the real killer, but Anastasia has had her fill of dead bodies. She’s also not convinced of Shane’s innocence. Besides, she’s promised younger son Nick she’ll stop risking her life. But how can she say no to Alex?

USA Today bestselling and award-winning author Lois Winston writes mystery, romance, romantic suspense, chick lit, women’s fiction, children’s chapter books, and nonfiction under her own name and her Emma Carlyle pen name. Kirkus Reviews dubbed her critically acclaimed Anastasia Pollack Crafting Mystery series, “North Jersey’s more mature answer to Stephanie Plum.” In addition, Lois is an award-winning craft and needlework designer who often draws much of her source material for both her characters and plots from her experiences in the crafts industry.


Drop Dead Ornaments by Lois Winston is the seventh installment in An Anastasia Pollack Crafting Mystery series.  Anastasia Pollack arrives home from the hospital after her encounter with Virginia Owens to find Alex and his friends have taken over the house.  For their senior community service project, they have crafted ornaments to sell at Westfield’s Holiday Crafts Fair and Bazaar.  The money they raise will benefit the county food bank.  They are creating additional ornaments since Sophie Lambert’s father, Shane has agreed to match their donation.  At the bazaar the next day, Anastasia notices a blonde woman lurking around.  Anastasia, Zach, Alex and Nick are having dinner at the Lambert house when Detective Sam Spader arrives.  The blonde woman has been found dead and they are taking Shane is for questioning since he was seen interacting with her on the mall’s video surveillance.  The victim is later identified as Tammy Arnold, Shane’s ex-wife whom he has not seen in seventeen years.  When Shane is arrested, Sophie and Alex want Anastasia to don her sleuthing cap to prove Shane’s innocence.  With an eyewitness can Anastasia pull off a Christmas miracle?


Drop Dead Ornaments is a light-hearted cozy mystery.  I recommend reading the books in An Anastasia Pollack Crafting Mystery series in order.  Drop Dead Ornaments is the first book I have read in this series, I felt I was missing some of the backstory.  The author does include the highlights.  Anastasia is a widow with two kids, a communist mother-in-law along with her strange daughter and disturbing dog, her husband hunting mother, and her supportive boyfriend.  Let us not forget the rich brother-in-law with his three nasty children who would like a relationship with Anastasia.  Drop Dead Ornaments is an active book.  We have two mysteries, a mother-in-law on the run, the devil dog and its issues, Anastasia’s work for the magazine, snow storm, taking care of the kids, Flora on the prowl for a new rich husband, Ira stopping by unannounced and deciding to move closer to Anastasia, and preparing for Christmas (I think I got it all).  There are two straightforward mysteries with apparent guilty parties.  I would have preferred a more complex murder mystery with an active investigation (personal preference).  Many readers will be laughing continually at the antics of Anastasia and her clan in Drop Dead Ornaments.  There are craft ideas for ornaments included at the end of the book.  Drop Dead Ornaments will take you on a lively adventure.

Drop Dead Ornaments is available at Amazon, B&N, Kobo, and iTunes.  You can find a list of the other titles in An Anastasia Pollack Crafting Mystery series here on Amazon.The author is hosting a giveaway in honor of the tour.  Click here to enter or use the Rafflecopter form below.  I hope you will take the time to visit the other stops on the tour.  There are author interviews, guest post, character interviews and other reviews.  You can see what the other bloggers thought about Drop Dead Ornaments.  Make sure to leave a comment on my blog before you depart for an extra entry.  Thank you for joining me today.  I will feature The Christmas Remedy by Cindy Woodsmall tomorrow.  I hope you have a jolly day.  Take care and Happy Reading!

November 1 - I'm All About Books – SPOTLIGHT

November 2 - The Book's the Thing – REVIEW

November 3 – Here's How It Happened – REVIEW

November 4 – Curling Up by the Fire – REVIEW