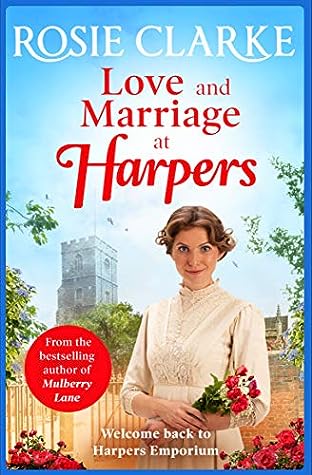 Good Day!  I hope you and your family are doing well and staying sane.  Staying home is something I am used to, but I know it can be challenging for those not used to it.  Being productive can be difficult unless you get into a routine.  Setting a schedule is beneficial if you need to get work done.  There are some wonderful books coming out on March 31.  Here are a few examples:  The Sisters Grimm by Menna van Praag, Murder at the Mena House by Erica Ruth Neubauer, A Fatal Yarn by Peggy Ehrhart, Gone with the Whisker by Laurie Cass, and Thursday's Bride by Patricia Johns.  Berried in the Past by Peg Cochran and Sunsets, Sabbatical and Scandal by Tonya Kappes are out today.  They are both lighthearted cozy mysteries.  What are you reading?

Love and Marriage at Harpers by Rosie Clarke has Rachel, Sally, Maggie and Beth working at Harper’s Emporium in London in early 1913.  The four ladies also share an apartment and are ardent supporters of suffragette cause.  However, they do not agree with Emmeline Pankhurst’s militant approach (she blew up the villa being built for Lloyd George) and will be switching to a branch more in line with their beliefs.  Ben Harper has been gone for five months and Sally wonders if he will ever return.  She has feelings for him, but Ben has not contacted her since he has been in New York.  Mick O’Sullivan makes his interest in Sally known and she soon learns that Mick has hidden depths.   Could their friendship blossom into something more?  Beth Grey is a senior salesgirl who loves her job at Harper’s.  She is dating Jack Burrows when he is not out on a ship and they make plans for their future.  Beth is worried about her Aunt Helen who recently married Gerald.  Her aunt looks tired, worried and Beth noticed a bruise on her arm. Helen refuses to leave Gerald and Beth is worried Gerald will become more violent.  Maggie Gibbs is the youngest member of their group.  She runs into her ex-fiancé, Ralf who wishes to rekindle their relationship. Maggie is not sure Ralf has changed and is still hurt at how she was treated.  Rachel Craven is a widow who is being squired about by solicitor, William Bailey.  Rachel can see a future with him, but then she learns something about William that changes her opinion of him.  Come along to Harper’s Emporium to find out what happens with these four ladies.
Love and Marriage at Harpers by Rosie Clarke is the second novel in Welcome to Harpers Emporium series.  This is a series that needs to be read in order. I thought this historical novel contained good writing with engaging, developed characters.  The story flowed beautifully thanks to Rosie Clarke’s warm writing style.  I felt like I was joining the ladies in 1913 London.  The hats, jewelry and clothing descriptions allowed me to visualize them.  I could tell the author did her research for this series.  Women’s suffrage was a hot topic at the time especially Emmeline Pankhurst’s exploits.  The author included arrested suffragists going on hunger strikes, the “Cat and Mouse Act (horrible law), and the rumblings around Europe that will eventually lead to war.  Rachel Craven, Maggie Gibbs, Beth Grey and Sally Ross met when they applied for employment at Harper’s Emporium before it opened.  They became friends while working in the store and then roommates.  As they live and work together, they become a family.  The ladies are dating and falling in love in this story.  Ben Harper finally returns and tells Sally why he was away (he still should have written).  Jenni Harper visits and adds liveliness to the story.  Your emotions will run the gamut while reading Love and Marriage at Harpers.  I was sad when I reached the last page.  I am eager to find out what happens next to these ladies.  Love and Marriage at Harpers is a charming historical novel with suffragette supporters, a hectoring husband, sedulous salesgirls, a lively London, beloved beaus, and notable nuptials.
Love and Marriage at Harpers is available from Amazon* as well as The Shop Girls of Harpers.  Both are available through Kindle Unlimited. The next book in Welcome to Harpers Emporium series is Rainy Days for the Harpers Girls which will be released on June 2.  The next novel in Rosie Clarke's Mulberry Lane Series is A Reunion at Mulberry Lane which will be out on August 20. Thank you for joining me today.  Tomorrow I am sharing my review of Death on the Page by Essie Lang.  It is the second book in A Castle Bookshop Mystery series.  I hope you have an uplifting day.  Take care, stay safe and Happy Reading! 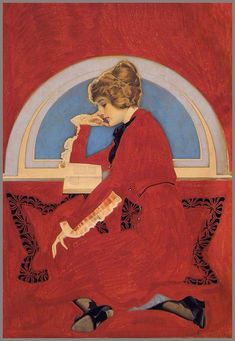