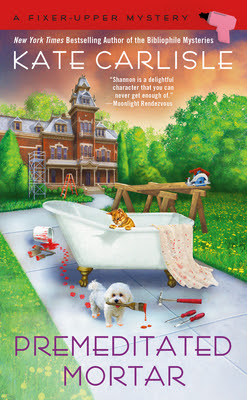 Premeditated Mortar by Kate Carlisle has Shannon Hammer starting the largest project of her career.  Her best friend, Jane Hennessey has purchased one of buildings at the Gables which she plans to turn into a high-end hotel.  The Gables was an insane asylum until it was abandoned, and it holds a personal connection to Jane.  The seven expansive buildings have beautiful Victorian architecture.  On the day of the groundbreaking ceremony, a group of rowdy protestors show up and wreak havoc.  They end up dousing the project manager, Rachel Powers with a disgusting red substance.  Unfortunately, the troubles are just beginning on this project.  A series of incidents leaves Shannon with minor bumps and bruises but with major suspicions.  There is something fishy going on at the Gables and Shannon intends to get answers. 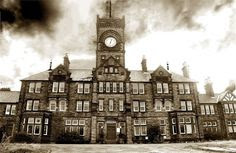 Premeditated Mortar by Kate Carlisle is a compelling cozy mystery.  Shannon Hammer, Mac Sullivan, Jane Hennessey, and the gang are back.  Jane has purchased the seventh building at the Gables which was once the Northern California Asylum for the Insane. The buildings have been abandoned for years but there is no denying the potential.  Shannon cannot wait to start the project with her crew.  It will take a year to turn the Victorian building into the Hennessey Hotel.  Some people, though, are not excited about the project and set out to derail it.  I thought Premeditated Mortar was well-written with developed characters and steady pacing.  I enjoyed the descriptions of the town and the Gables.  The author’s vivid word imagery brought the scenes alive for me.  The mystery was multifaceted and creative.  There are several viable suspects, misdirection, and subtle clues.  I had a good time following this whodunit and figuring out the identity of the guilty party.  I like how the romance is progressing between Mac and Shannon.  We also get to catch up with Chloe and Eric as well as Jane and Niall.  Romance is blooming in Lighthouse Cove and the ending has me eager for the next A Fixer-Upper Mystery.  Premeditated Mortar can be read as a standalone if you are new to the series or if you have missed a book or two.  Premeditated Mortar is a diverting cozy mystery with malicious mischief, creepy corridors, awesome architecture, flourishing romances, and a perplexing puzzle. 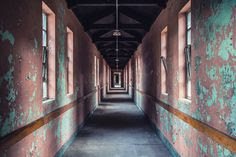 Premeditated Mortar is available from Amazon* along with the other seven novels in A Fixer-Upper Mystery series.  Kate Carlisle also writes A Bibliophile Mystery series.  Little Black Book will be published on June 1, 2021.  I enjoyed picking out the photos for the blog today.  A creepy Victorian insane asylum exterior and interior hallway of an abandoned one.  Thank you so much for reading my review.  On December 6, I will be a stop on the Great Escape Virtual Book Tour for A Deadly Edition by Victoria Gilbert.  It is the 5th book in A Blue Ridge Library Mystery series.  I hope you will join me.  May you have a satisfying day.  Take care, be kind, and Happy Reading! 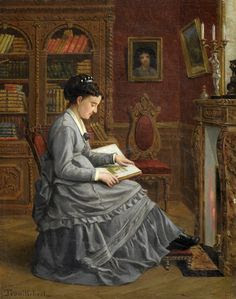