Marriage Can Be Mischief by Amanda Flower

Marriage Can Be Mischief 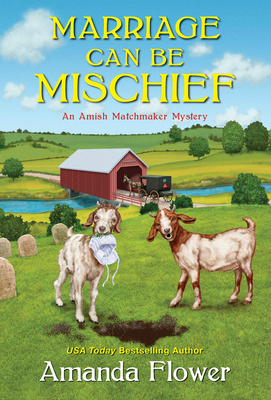 Book Summary
Millie Fisher may be widowed, but she leads a full life in her Amish hometown of Harvest, Ohio. There’s her quilting circle, her Boer goats, her gift for matchmaking—and the occasional murder . .  Millie is happy that her childhood friend, Uriah Schrock, has returned to Harvest after decades away. He was sweet on Millie in their school days, but she only had eyes for her future husband. Now, there’s a new spark between them, so Millie is concerned when Uriah doesn’t show up at the Harvest concert series—or for his job as the Village square’s groundskeeper. Perhaps Millie has been involved in too many murder investigations, but she has a sinking feeling. And when she and her best friend, Lois, find Uriah with the police, it seems she’s right  . . . A film crew is in Harvest to make a movie about a forty-year-old unsolved murder. A skeleton has been found at the bottom of a ravine—and Uriah is certain it’s his sister, Galilee. Right before Uriah left Ohio, she disappeared, and her harsh husband, Samuel, was found fatally stabbed with a knitting needle. The sheriff declared that Galilee killed him and ran away. Uriah never believed the theory, and he’s come back to Harvest hoping, Gott willing, Millie will help him stitch together the truth . . . 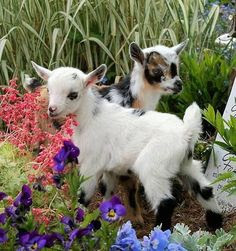 Marriage Can Be Mischief by Amanda Flower is an entertaining cozy mystery.  While it is the third book in An Amish Matchmaker Mysteries, it can be read as a standalone.  You will be missing out two amusing stories though.    I love that we get an older protagonist in this series along with her over-the-top sidekick.  Millie Fisher is a delight and so is her best friend, Lois.  These two are complete opposites in appearance.  Millie and Lois are a hoot.  That Lois is something else.  I love that Lois calls Millie “Amish Marple.”  Millie’s goats are amusing.  I love that Millie takes Peter and Phillip for walks.  I can just see Millie on her red bike with her two mischievous goats following along.  Those two rotten darlings are Millie’s furbabies.  It is always a pleasure to visit Harvest, Ohio.  It is a charming town with a mix of Amish and Englisch.  I like that the characters from An Amish Candy Shop Mysteries make an appearance like Margot and Deputy Little.  I keep hoping the sheriff of their town will get ousted. I wish Aidan had run against him in the last election.  The mystery has a documentary crew finding a skull in a ravine.  It relates to a cold case that is forty years old.  Millie’s friend, Uriah Schrock has been searching for his sister, Galilee Zook for forty years.  She disappeared the same night her husband, Samuel Zook was found dead.  Uriah never believed the rumor that Galilee killed her husband or that she went Englisch.  Millie and Lois begin asking questions in the hopes of discovering what happened to Uriah’s sister.  Someone is not happy with Millie’s meddling and decides to stop her.  I had a good time following along on Millie and Lois’ investigation.  You never know what Lois is going to do or say next.  While I had no problem identifying the guilty party, it did not diminish my reading pleasure.  I like how the case wrapped up.  I appreciated the epilogue at the end of the book.  I hope we get many more An Amish Matchmaker Mysteries.  Marriage Can Be Mischief is an amusing whodunit with gamboling goats, a troubled brother, a broken buggy, a missing sister, a friendly filmmaker, an unsupportive sheriff, a colorful coiffure, and an Amish sleuth. 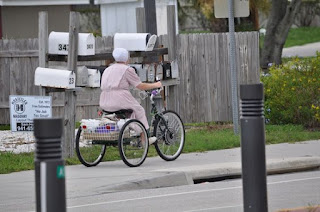 Marriage Can Be Mischief is available from Amazon*.  The other two books in An Amish Matchmaker Mystery series are Matchmaking Can Be Murder (on Kindle Unlimited) and Courting Can Be Killer.  An Amish Matchmaker Mysteries ties into An Amish Candy Shop Mysteries.  Amanda Flower has Because I Could Not Stop for Death publishing  on July 12, 2022. On February 22, 2022 we can obtain Put Out to Pasture which is the 2nd book in Farm to Table Mysteries.  The latest A Piper & Porter Mystery is Frozen Detective which releases March 22, 2022.  Thank you for visiting today.  I will return tomorrow to share my thoughts on A Murder Like No Author by Amy Lillard.  It is the 3rd book in A Main Street Book Club Mysteries.  I hope that the first day of December is a cozy one for you.  Take care, be kind, and Happy Reading! 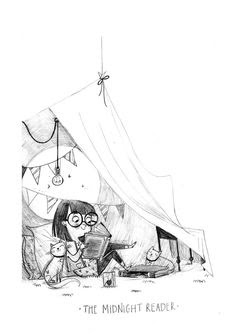