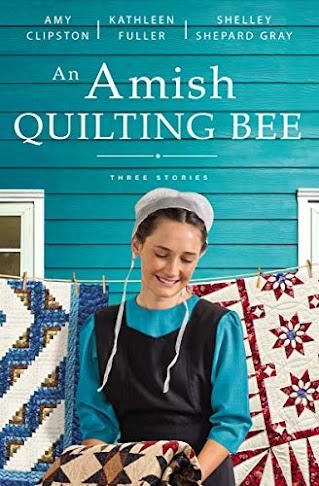 When Colin Zook and his beloved grandmother lose everything in a fire, their greatest loss is a beloved family heirloom quilt that helped keep her dementia at bay. When Joanne Lapp hears about the loss, she decides to re-create the quilt. Colin soon feels himself developing feelings for her, but he’s held back by the knowledge that a future with him would involve care of his grandmother and his farm. Will Joanne look past his list of responsibilities and see him for who he truly is? 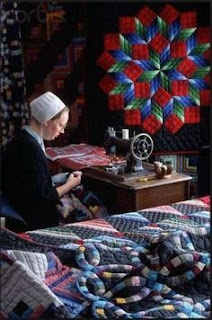 A Common Thread by Kathleen Fuller

Susie Glick returns from a shopping trip laden with beautiful fabric for her quilting group. On the bus ride, Alex Lehman—her crush from three years ago—sits next to her. Alex left Middlefield to explore the country, and now he’s back and ready to join the church. Susie was just a kid when he left, but now she’s a woman—and she definitely has his interest. The women in her quilting circle aren’t as excited about Alex’s return, assuming that he’ll leave again in search of adventure. Susie is convinced they’re wrong, but just as they start dating, Alex tells Susie he has to leave. He says he’ll return, but Susie must decide whether or not she can trust the man she fears has captured her heart. 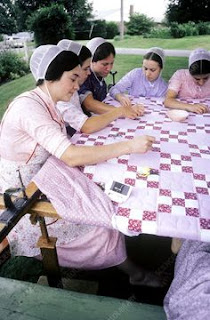 Stitched Together by Shelley Shepard Gray

Rosie’s joy is her yearly project for the Pinecraft Mennonite Quilt Sale, and she dreams of being the top earner. But she’s worried that she’s bitten off more than she can chew with her latest entry. To make things even more confusing, after coming to terms with her single state, she’s recently formed a friendship with Tim Christner. He’s only in town for a month, but he has Rosie wondering if she’s found love at last. Now all she has to do is figure out how to get the quilt done so she can concentrate on him. But with her once very organized life in total disarray, everything comes to a head just before the sale. Rosie is forced to reexamine her priorities before she loses not only her place in the quilt show but everything else she’s ever wanted. 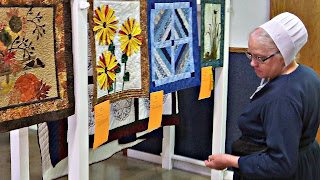 An Amish Quilting Bee by Amy Clipston, Kathleen Fuller, and Shelley Shepard Gray contains three charming Amish tales.  I enjoyed all three tales of these sweet novellas.  Patchwork Promises by Amy Clipston has Colin Zook taking care of his dairy farm and his grandmother on his own.  They have endured a great deal of loss recently including a fire that destroyed their home and belonging.  His grandmother particularly feels the loss of a beloved quilt.  Joanne Lapp learns about the quilt and sets out to recreate it.  Joanne wants to make sure to get it right which results in spending time with Colin. Colin finds himself falling in love with Joanne, but he is sure that she could not care for him because of his responsibilities.  What does God have in store for Joanne and Colin?  A Common Thread by Kathleen Fuller has Susie Glick thrilled to discover that Alex Lehman has returned to town after two years.  Susie was a teenager when Alex left, but now he notices that she is a lovely woman.  They just begin dating when Alex must leave town.  Alex is shocked when he gets a letter from Susie calling off their courtship.  He does not understand Susie’s change of heart.  Will Alex accept her decision or fight for the woman he loves?  Stitched Together by Shelley Shepard Gray has Rosie working on an intricate quilt for the annual Pinecraft Mennonite Quilt Sale.  The proceeds help mission efforts, and the top quilt gets special recognition.  Rosie is worried she will not get the quilt done in time.  Then she meets Tim Christner, her sister’s brother-in-law.  Rosie wants to spend time with Tim while he is in town, but she has other obligations.  Everything is spiraling out of control for Rosie.  Can Rosie get her priorities in order before it is too late? 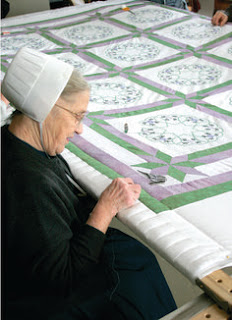 I thought the three stories were well-written with realistic, developed characters.  I liked the life lessons we get from these novellas.  The importance of faith and what we are willing to do for those we love, everyone deserves a second chance and people can change, and as love develops, we must grow with it.  We also see the importance of communication in a relationship and to always follow God’s lead.  I like how the quilt theme ties the three stories together.  I enjoy stories that touch my heart and leave me smiling.  An Amish Quilting Bee has three sweet tales that are perfect for reading on a cold afternoon while snuggling under a cozy quilt. 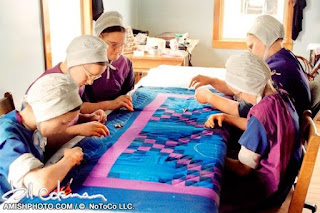 An Amish Quilting Bee is available from Amazon*.  Amy Clipston has Foundation of Love which is An Amish Legacy Novel publishing February 1, 2022.  I am eager to read it.  Kathleen Fuller has Love in Plain Sight releasing May 3, 2022.  It is the 3rd An Amish Mail Order Bride Novel.  I cannto wait to read the next book in this cute series.  Edgewater Road by Shelley Shepard Gray comes out March 3, 2022.  It is the debut of The Rumors in Ross County series.  It sounds interesting!  Thank you for stopping by today to read my review of this newly published book.  Some of the other books that came out today are:  Renewed for Murder by Victoria Gilbert, How to Book a Murder by Cynthia Kuhn, Pride Prejudice and Peril by Katie Oliver, A Plus One for Murder by Laura Bradford, Absence of Mallets by Kate Carlisle, and An Amish Quilting Bee. I hope that you have an enchanting day.  Take care, be kind, and Happy Reading! 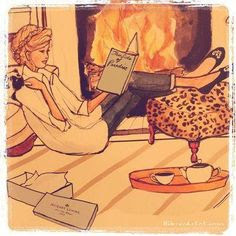